When food decomposes in landfills, it releases methane, a greenhouse gas that is at least 28 times more potent than carbon dioxide.

If food waste were a country, it would be the third-largest emitter of greenhouse gases behind China and the U.S., according to the World Resources Institute.

Project Drawdown, a coalition of experts focused on climate change solutions, ranks reducing food waste as the No. 3 action item out of 80 to mitigating the crisis.

Food waste happens at every point on the supply chain, including in your kitchen. The EPA offers some helpful ways to cut down on food waste in your household. If all else fails, compost—which actually sequesters carbon and creates primo fertilizer for plants.

Foodizen: Composting in the City
Philadelphians dump 400,000 tons of food and yard scraps into the landfill every year. A city community composting pilot is working to put that waste to good use

Business For Good: Honeycomb Credit
The Pittsburgh-based startup has expanded to Philly with a crowdfunding model to help small businesses with one of their toughest challenges: getting loans
Business for Good: The Soulfull Project
Two Campbell’s alums have struck out on their own to create healthy, delicious oatmeal—with a purpose
Business for Good: Ready to Work
Everyone benefits when companies like Boathouse Row’s Cosmic Cafe hire people with disabilities for meaningful work
Business for Good: Dorothy
A Penn alum’s startup helps regular folks predict flooding—something climate change will make more necessary than ever
Business for Good: Everyday Philanthropists
Entrepreneur Keith Leaphart’s new app, Philanthropi, aims to give everyday donors and nonprofits better access to their most powerful tool: each other.
One Step Forward
First Step Staffing connects vulnerable people with jobs. Then, it ensures they keep them

Hear from the founder

On the go? Prefer to listen to this story?
CitizenCast has you covered 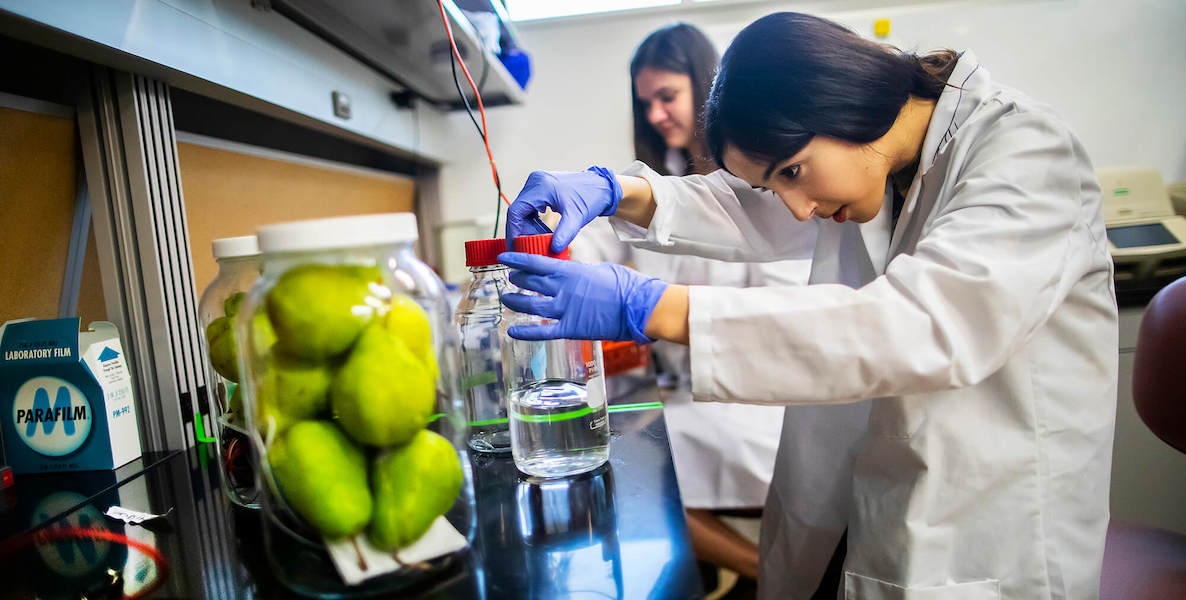 Business for Good: The Fruit Hackers

Business for Good: The Fruit Hackers

Like most people, you probably assume that once an apple is off the tree it’s effectively dead, just a static object sitting on your countertop waiting to be eaten.

As founder and CEO of Strella Biotechnology, she has invented a device that reads that information to solve one of the world’s biggest problems: food waste.

Strella’s patented sensor sits in the cold storage room of produce packing houses, where it detects spikes in ethylene, the chemical that prompts the ripening process.

Using the Internet of Things (IoT), a system that transfers data over a virtual network, the sensor alerts Strella, which then tells suppliers which apples should be distributed first.

Related from The Philadelphia Citizen:
Internet All Your Things
The city wants your ideas for how to smarten up Philly through its proposed Internet of Things

The client then has two months to get the produce onto grocery store shelves before it spoils—keeping it out of the landfill and saving farmers hundreds of thousands of dollars.

Sizov came up with the idea in 2017 as a molecular biology major at the University of Pennsylvania after realizing that the field she had committed to—neuroscience—wasn’t actually her cup of tea.

“Part of the issue with the research I was doing was that I didn’t really see it helping people anytime in the near future,” she says. “And I wanted to do something with my life that was actually going to help and contribute to society.”

She read academic papers, searching for a new area of interest. That’s when she came across the startling fact that 40 percent of the world’s fresh produce is lost along the supply chain, before it can even reach consumers.

“The grower loses some fruit because they don’t have enough workers to help pick the fruit or maybe the quality is insufficient, so they just leave it on the tree,” Sizov says. “In packing, they have no idea where the ripest fruit is so they just move stuff and sometimes they open these storage rooms and a flood of moldy apples runs at them. On the retail front, they have no idea which fruit is going to last for how long.”

The consequence, of course, is a massive loss in profits. But according to Dr. Shelie Miller, an associate professor at the University of Michigan’s School for Environment and Sustainability, food waste is also detrimental to the planet.

“If someone comes up to you and is like, ‘I can solve your biggest problem,’ you’re usually receptive to that type of discussion,” Sizov says.

Her research centers on a variety of environmental issues, including food waste, and the emerging technologies dedicated to solving them.

On top of that, when food decomposes in landfills, it releases methane, a greenhouse gas that is at least 28 times more potent than carbon dioxide.

If food waste were a country, it would be the third-largest emitter of greenhouse gases behind China and the U.S., according to the World Resources Institute.

As such, Project Drawdown, a coalition of experts focused on climate change solutions, ranks reducing food waste as the No. 3 action item out of 80 to mitigating the crisis.

Struck by the enormity of this problem, Sizov realized no one was offering a viable solution—so she decided to find one herself.

Inspired by six years of working in medical labs, she wanted to create a piece of biotechnology that mirrors glucose tests, which diabetic patients use to monitor blood-sugar levels. But she had no idea how to build that.

“So I went to a lab at Penn and went to the nicest professor I could find and said, ‘How would you go about doing this?’” Sizov says. “And so very, very slowly, we built up something.”

Once they had a working product, they decided it would be best applied to apples, which sit in cold storage for over a year before they are purchased in the store.

In October 2018, a packing house in Washington state agreed to test the product.

The following January, the sensors detected an ethylene spike in a storage room full of apples marked for distribution in July. When emitted, ethylene triggers the ripening process in surrounding fruit—the reason bananas, for example, brown faster when next to other bananas.

Knowing that the whole batch of apples would ripen and spoil long before the planned distribution date, Sizov told the client to pull the apples immediately, saving the business $400,000.

With that success story under her belt, Sizov spent her senior year seeking funding, both on and off-campus.

She attended conferences, participated in innovation competitions and presented to investors.

Her efforts earned the startup $550,000 in equity-free investment, from programs like the University of Pennsylvania’s Penn Wharton Innovation Fund and President’s Innovation Prize; the M&T Innovation Fund; the Summer Venture Awards; and the VIP-Xcelerate program.

Strella’s client base has also grown. The company currently serves eight produce packers, which represent 21 percent of production for apples and pears in the United States.

And while Sizov says that, at 23 years old, her age tends to raise some eyebrows, most of the farmers and packers she’s approached are willing to listen to her pitch—especially when they learn how much money her tech could save them.

“If someone comes up to you and is like, ‘I can solve your biggest problem,’ you’re usually receptive to that type of discussion,” she says. “In general, it’s just recognizing that you are young and you don’t know everything in the world. So you have to surround yourself with people who do know a lot more than you in some aspects, and take all that advice and turn it into something.”

The company, based out of incubator and co-working space Pennovation Works in Grays Ferry, is currently self-sustainable and supports a small staff of five.

Knowing that the whole batch of apples would ripen and spoil long before the distribution date, Sizov told the client to pull the apples immediately, saving the business $400,000.

“It’s cool because we all get along,” Sizov says of her staff. “This is a collaborative effort because every single one of us knows something that the others don’t. And so we tap into that.”

Strella has big plans for its next chapter. The company is hiring and is in talks with investors to raise at least $3 million in the next few months. But the goal isn’t maximizing profits, according to Jordan.

“If you have the opportunity to have a really large impact, you really don’t necessarily want to go for profitability,” she says. “You want to invest as much as you possibly can. And so it’s more like, ‘How much can we invest to move fast and solve this problem?’ as opposed to, ‘Are we profitable?’”

The goal: move beyond cold storage and begin applying Strella’s tech to every step of the supply chain, to monitor freshness during transportation and at the retail level.

According to Miller, addressing loss along the supply chain is crucial. But to truly eliminate food waste, solutions should take a multi-pronged approach.

“I think it’s definitely a very promising technology,” she says of Strella. “I think it is also really important to highlight that food waste at the household level is probably a bigger issue that [Strella] won’t tackle.”

But Sizov says that Strella does have its sights set on developing consumer-level tech in the future. The company has considered integrating its sensors into refrigerators, in order to alert people when food is expected to spoil.

For now, though, Strella’s team is confident that maximizing the efficiency of distribution will make a significant impact.

Sizov is enjoying the freedom that comes with entrepreneurship—as well as the knowledge that she’s doing something worthwhile.

“I feel like when we were all children, everyone in class wanted to be the next president or wanted to be an astronaut,” she says. “As people get older, they lose their hopes and dreams. I think running a business allows you to keep working towards those lofty ambitions and goals. And that keeps me passionate and excited about what I’m working on.”