Run with BoMF. Or donate.

Get into action with FundRacing or donate here. 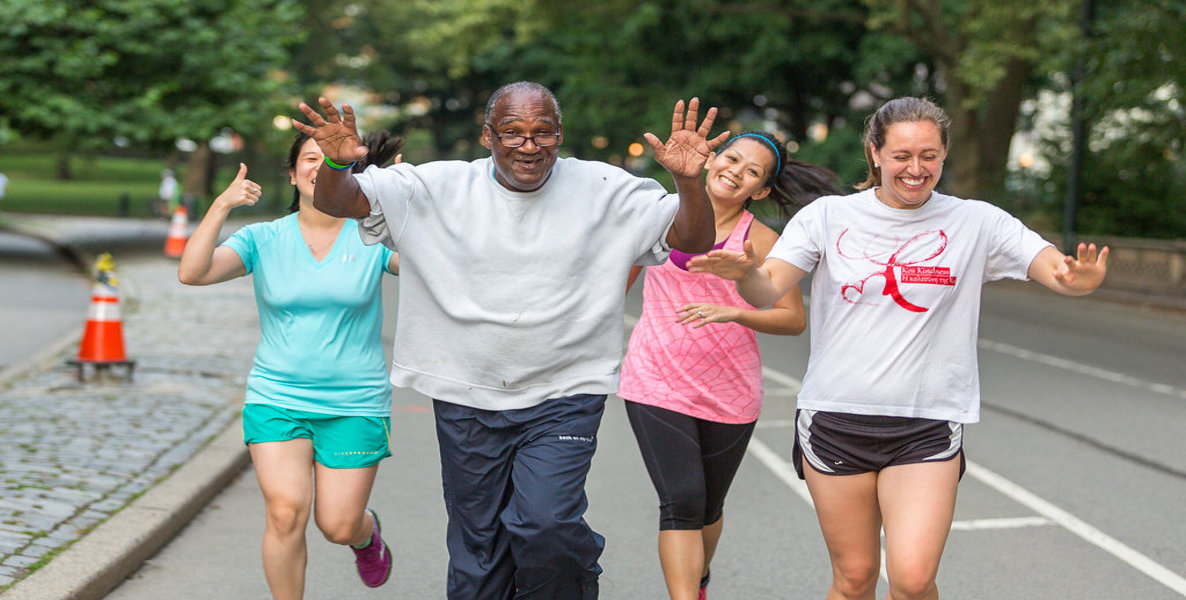 Running To A Fresh Start

At its 10 year mark, Philly-based Back on My Feet has improbably shown how running can help the homeless regain their footing

Running To A Fresh Start

At its 10 year mark, Philly-based Back on My Feet has improbably shown how running can help the homeless regain their footing

They run at 5:30 a.m. How crazy is that? They don’t get up at 5:30 a.m., and they’re not on their way to the site at 5:30 a.m. They are running at 5:30 a.m., two, three or four miles every morning, three times a week, starting before dawn and finishing with the sunrise. Most of them arrive 10 minutes early to the meeting point, the Speedway gas station on Bainbridge and Broad; if you ask how they’re doing, they all tell you that they’re doing great. Maurice—with his pink-armed shades—leads the group in a stretch. But this isn’t your average runners’ group.

If you join the Back on My Feet runners, you’ll be embarking on a 5K with some of Philadelphia’s most vulnerable, least represented citizens. The bulk of the runners in the group are homeless folks, largely from local shelters, where Back on My Feet does its recruiting. To join Back on My Feet they have to sign a contract—the non-legally binding kind—and commit to a few months of training three times a week with the group. Those who have a 90 percent attendance rate after the first month of running are entitled to participate in Next Steps, financial literacy and jobs skills training with corporate partners, that could eventually lead to work.

“For some of the people we work with, the training can be simply learning to turn on a computer or a tablet,” says Cathryn Sanderson, executive director of Back on My Feet’s Philly chapter.

Sanderson is kind of a wunderkind. She joined the program out of Wharton, where she studied philanthropy, about six years back, and within three years became the executive director of the group, overseeing its operations. And these days, there’s a lot to oversee. The group has 12 chapters nationally, and most recently opened one in San Francisco. Not bad for a tiny Philly non-profit founded by someone who wanted to make the tiniest bit of difference.

“The idea is that you need to learn the scheduling, the productivity to get you to where you want to go,” say Sanderson. “You can’t just show up marathon morning and run the marathon without having done the marathon. There’s a component of having to work for it. You literally have to be sweating. And you also have to consistently be there—running in the morning provides that consistency.”

The group was founded by Anne Mahlum, a then-Philadelphia based runner. According to Sanderson, Mahlum ran by a men’s shelter every morning, and decided to start a running group with the guys she’d see outside. Mahlum herself had once dealt with addiction—she says her father was a gambler—and learned to deal with some of her inner demons through fitness, particularly running.

“We’re approaching our 10-year anniversary,” says Sanderson. “And it all started with one woman running down the streets of Philadelphia. She asked herself, ‘Why am I just waving at these people? What if running could be just as valuable for them and in their lives?’ So she went into the shelter and, of course, she felt crazy, but nine people signed up.”

The group grew exponentially, opening east coast chapters in Boston and New York City within a few years; Mahlum pushed the group to expand as far as it could, and by the end of her tenure—she left the group a few years back and now runs a string of DC-based fitness centers called solidcore—Back on My Feet had worked with thousands of individuals, and had a volunteer network in the tens of thousands. The Philadelphia chapter has worked with hundreds of homeless individuals in the city, and the runs themselves are led by volunteers in four different areas of the city, including West Philly, South Philly, Center City and Point Breeze.

“It’s not only waking up at 5:30 in the morning, which is a hard thing in and of itself, it’s also bringing together a community of very different people who have never met before, and having them try something for the first time,” says Sanderson. “It’s also about getting people who are maybe going through different extremes at the moment—and that could even be on the volunteer side.” Plenty of Back on My Feet’s volunteers, and some of its run leaders, are former recruits who have dealt with homelessness.

The idea of running, for people without homes, seems counterintuitive: These are folks who need houses and jobs and health services—not running shoes and a shot at a marathon. But for Back on My Feet, running isn’t a gimmick; it’s a tool. Back on My Feet fills a gap in the transition from homelessness to reintegration. Few programs have the resources to make sure that their participants are fully acclimated to the simple rigors of daily life. You know, the small stuff. Schedule-making, timeliness and the like—the kind of minutiae that it can be hard for already-overstressed homes and housing facilities to address. Back on My Feet, in a sense, is a training program, helping the homeless acclimate to normal life just by providing schedules and extracurricular goals.

“Any program that honors the dignity of all people and brings together people from different backgrounds in a spirit of supporting each other’s transformation is a worthwhile endeavor,” says Laura Weinbaum, a Project HOME spokesperson. “Back on My Feet is principally volunteer-driven and often does help people connect to other services and housing to help them realize their full potential as individuals and as members of a broader society.”

1,500 of the 6,000 homeless or at-risk-of-homelessness individuals they’ve helped have received their GED after beginning the program. Similarly, Back on My Feet has attained more than 4,500 jobs and homes for those who have worked with the program, some 90 percent of whom have retained that employment after six months.

And Back on My Feet has worked. According to the group, 1,500 of the 6,000 homeless or at-risk-of-homelessness individuals they’ve helped have received their GED after beginning the program. Similarly, Back on My Feet has attained more than 4,500 jobs and homes for those who have worked with the program, some 90 percent of whom have retained that employment after six months.

“The idea is that you need to learn the scheduling, the productivity to get you to where you want to go,” say Sanderson. “You can’t just show up marathon morning and run the marathon without having done the marathon. There’s a component of having to work for it. You literally have to be sweating. And you also have to consistently be there—running in the morning provides that consistency.”

Sanderson chalks it up to learning commitment through running. And make no mistake: The folks who go through this program learn how to run; a few Back on My Feet alumnus have even gone on to finish the Philadelphia Marathon.

Sanderson credits a considerable portion of the group’s success to its community and business partnerships, like Stroehmann, KPMG and Independence Blue Cross; Back on My Feet can help these folks return some routine to their lives, sure, and provide them with life skills training, but the final step is reintegrating them back into the working world.

For Maurice, our leader at the run that began at Broad and Bainbridge, Back on My Feet was a key component in piecing his life back together. Maurice grew up in Philly, and spent most of his youth in the foster care system, where he says he was abused. After turning to drugs, Maurice wound up serving 18 years in prison; he was hooked up with Back on My Feet through Ready, Willing & Able, about four months back. He says that his attendance rate for the morning runs is close to 100 percent.

“After I joined up with these people, a lot of things came back into perspective. One was: people care about you. Back on My Feet is not just about running. It’s about caring for people. A lot of guys come out here and they’re down and out. They give you hugs every morning and help you along the way, man, and they take care of some things for you legally,” he says. “It gives me a sense of when I leave here, that I can get up every morning at 4 o’clock in the morning, and go to work.”

That is commitment, for anyone, in any circumstance. If you want to see their work up close, register for a run on their website. All they ask is that you bring a good attitude.

And try to keep up.