Think Philadelphia’s streets should become safer for bikers and pedestrians?

About biking in Philly

How to be an informed cyclist

Check out their useful maps for safe biking routes around the city and make sure you know your rights while you’re at it.

You can support their work by joining the coalition or donating here. 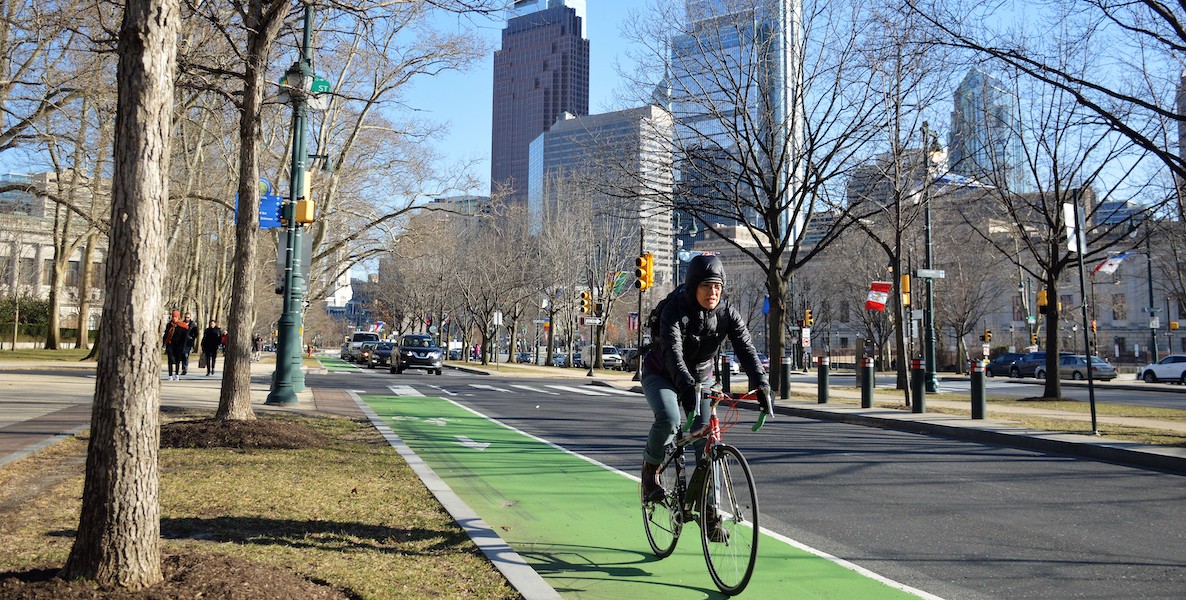 The state Senate may fix a technicality that prevents the city from installing safe bike lanes. A local bike commuter and nurse urges it to do so.

The state Senate may fix a technicality that prevents the city from installing safe bike lanes. A local bike commuter and nurse urges it to do so.

No one expects that their daily commute will end in death.

Emily Fredericks, 24, left home and was bicycling to her job as a pastry chef early one morning in 2017. She was hit and killed by a garbage truck turning right on Spruce Street.

Pablo Avendano, 34, was delivering food on his bicycle on a rainy evening in 2018 when he was fatally struck by a car on Spring Garden Street.

These two tragedies represent a larger problem: Philadelphians who commute via bicycle or on foot face a much higher risk of serious injury or death.

But our own state legislature has the potential to solve this issue. A bill is currently up for a vote in the Pennsylvania Senate that overrides a long-standing technicality about street design.

Philadelphia touts itself as a walkable city, from quiet colonial streets to the Schuylkill River Trail. But step off those well-worn paths and shocking data emerges. Last year in Philadelphia, more than 100 people were killed in traffic violence.

HB 792 is a technical fix to the PA Vehicle Code, allowing cities to more easily install parking-protected bicycle lanes. These lanes separate bikes from moving cars by using parked cars as the buffer. They also prevent cars or delivery trucks from parking in bike lanes, a problem which often causes cyclists to veer out into the road and increases their risk of a collision with cars.

Philadelphia touts itself as a walkable city, from quiet colonial streets to the Schuylkill River Trail. But step off those well-worn paths and shocking data emerges. Last year in Philadelphia, more than 100 people were killed in traffic violence. Nearly half of those were pedestrians and bicyclists. The protected bike lanes that could be created by HB 792 would help to slow down speeding traffic and keep vulnerable bicyclists and pedestrians safer on the road.

Indeed, tensions have run high in South Philly since the city installed parking protected bike lanes along a stretch of 11th Street that has seen a high number of crashes over the past few years. These opponents also argue that with more bodies on the road, more collisions will occur.

But in a matchup between several tons of steel and a human body, the car will always win.

I’m one of the lucky survivors. Eight years ago, a distracted driver sped through an intersection as I crossed the street with the walk sign. The damage: a broken ankle, two surgeries, four months in a boot and panic attacks for years.

Doctors, nurses, and physical therapists reminded me of how lucky I was. I could have easily met the same fate as Emily, Pablo and so many others.

Protected bike lanes not only allow safer spaces for bicyclists but have an impact on pedestrians—they shorten the distance of the crosswalk and allow pedestrians a head start in the crosswalk before turning vehicles.

Along with the safety that this bill will provide, consider the health benefits that could result from more Philadelphians walking and biking.

Physical activity helps to manage and prevent chronic illnesses. Cycling is an aerobic workout. It’s easy on joints and helps strengthen muscle and build bone. Many studies have found that regular physical activity, such as riding a bike or fast walking, may reduce the need for blood pressure medications.

Every day as a nurse I see the long-term effects that high blood pressure has on my patients: higher risk of strokes, heart attacks, and kidney failure are just a few. How many of my patients’ health problems could be relieved by access to safe streets where they could occasionally exercise without risk of collision with a car?

Underlying many of Philadelphia’s major health issues are the environments in which people live. A person’s zip code can determine their health outcomes just as much as their genetics. Current transportation policies have focused on highway investments and often excluded poorer neighborhoods, leaving residents with subpar street quality. Creating solid street infrastructure is a major step in making bicycling accessible for all. A vote for this bill would be advancing health equity for all Pennsylvanians.

The Pennsylvania Senate Transportation Committee meets only a handful more times before the end of the year. Please call the chairs of the committee, Senators Kim Ward (717-787-6063) and John Sabatina (717-787-9608), and urge them to bring HB 792 up for a vote when the committee reconvenes this month. A vote for this bill allows cities to take steps to reduce these health and transportation disparities.

I’m an advocate because of my own close calls. Because Philadelphians deserve to commute and exercise on our city’s streets without risking serious injury or death. Because Emily and Pablo and hundreds of other Philadelphians should still be alive today. Those who are more concerned about a lost parking space than a lost life should take a good hard look in the mirror. We all just want to get home safely.

Lillie Carlile is a nurse who lives in West Philly.