The Citizen Recommends: Sleep out with Covenant House
The city’s shelter for homeless youth is expanding, but more needs to be done. Join them by sleeping outside on a cardboard box to help out
One Student at a Time
At El Centro de Estudiantes, intense adult interaction helps high school dropouts graduate—and sets them up for success in their lives
The Play(ground)’s the Thing
Landscape architect Lois Brink turned Denver school yards into community parks. Can she do the same in Philly? 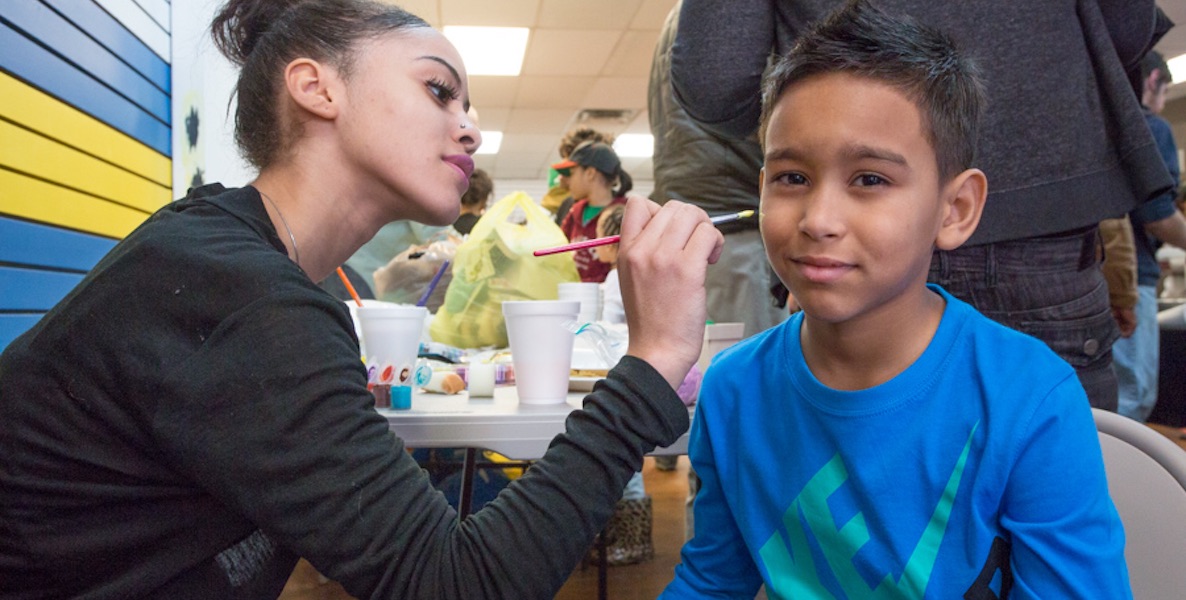 A Porch Light in Kensington

A city/Mural Arts initiative seeks to change Kensington with programming for a forgotten group: families of those addicted to drugs

A Porch Light in Kensington

A city/Mural Arts initiative seeks to change Kensington with programming for a forgotten group: families of those addicted to drugs

It’s a good thing that the new Porch Light storefront in Kensington has air conditioning. It’s a muggy 75 degrees, and there must be at least 60 people packed into the room last weekend—imagine a space about the size and depth of your average B-tier cell phone company store. And people aren’t sitting still: Folks are ambling in off the street for a free sandwich or slice of cake, kids are getting their faces painted, and people start swaying once an acoustic rock band takes the stage (“Not as bad as you’d expect,” someone comments). All in all, it’s a good vibe factory.

Maybe the lighthearted gathering is the best way to set the stage for something that stands to be such a serious and monumental undertaking. This is the grand opening of the Kensington Porch Light storefront, a partnership between Mural Arts and the Philadelphia Department of Behavioral Health and Mental disAbility Services, which will serve as both a safe space for families that have members who are struggling with drug addiction, and as a space for local artists to work on art installations with the help of those seeking treatment for addiction or mental health issues. Folks involved in the group will not only receive behavioral and addiction treatment, but have the opportunity to work with Mural Arts Philadelphia to develop murals and art installations across the city.

Nearly half of Kensington residents live in poverty; neighboring Fairhill has a poverty rate closer to 60 percent, among the highest in the city. The neighborhood struggles with rampant homelessness, addiction rates are through the roof and drug sales seem to be the defining economic metric of the neighborhood.

Mural Arts launched its Porch Light program 10 years ago, and for the last five years has operated Southeast by Southeast, a program that serves primarily Asian immigrants in South Philly; it has become immensely popular in the communities it serves. With the Kensington storefront, the program goes from a cause to a mission, taking on a whole new magnitude of societal issues. Specifically: The heroin epidemic, of which Kensington is the epicenter.

Nearly half of Kensington residents live in poverty; neighboring Fairhill has a poverty rate closer to 60 percent, among the highest in the city. The neighborhood struggles with rampant homelessness, addiction rates are through the roof, drug sales seem to be the defining economic metric of the neighborhood and the police have all but abandoned the area. As Phawker made the point most succinctly a few years back: “All 10 drug corners on our list (of hottest drug corners in Philadelphia) are located in North Philadelphia’s Kensington and Fairhill sections.”

The challenge for Porch Light seems daunting; after all, how could what functionally adds up to an art group bring real change to a neighborhood that’s seen its fair share of well-meaning groups say they’re going to do exactly that, and fail to achieve their goal?

Because, quite simply, Porch Light works. A few years ago, Porch Light—a joint venture between Mural Arts Philadelphia and the Philadelphia Department of Behavioral Health and Mental disAbility Services—commissioned a study from Yale University, which found that the program had quantifiable effects on the neighborhoods they served, from overall safety to informal social control to behavioral health stigma. People suffering from addiction and mental health issues, according to Porch Light, are better served when they’re not only given the personal goal of self-betterment, but the goal of improving their community.

Councilwoman Maria Quiñones-Sanchez, whose district includes Kensington, agrees. At the Porch Light party, she’s pulled away from an interview three or four times, as everyone—from event volunteers to folks off the street—wants to give her a piece of their minds. She says the plan to bring a Porch Light location to Kensington has been long in the making.

Mural Arts works with the city to help find locations that could use both a recovery facility and new mural installations, and Kensington was definitely on the shortlist. The hard part was finding the real estate. The Porch Light storefront has to be on a main thoroughfare, accessible to anyone who needs help. But landlords and business owners aren’t exactly tripping over themselves to provide low-rent offices to a group that caters, primarily, to those with addictions and mental health issues.

“Even before I got elected, I was a non-profit director,” says Quiñones-Sanchez. “Really, through some of their work with returning citizens, I saw how Mural Arts was helping people heal. [Working on murals] is something that families can do together. We need the same here with some of our addicted community, young people, families. This particular commercial corridor is quite challenging, though.”

It was neighborhood businessman Kip Choe who stepped up and did the right thing. Choe and his family own both the storefront in which Porch Light is currently located, and the deli-slash-convenience store next door. Choe bops in and out of the grand opening now and again, returning back to the store to tend shop; he’s just finishing slicing up some turkey when I talk to him. According to Choe, Porch Light’s storefront is some prime real estate—the kind of place where an electronics store or a smoke shop could do serious business. As a matter of fact, he had it all set up to be a pizzeria; he’d purchased the equipment and everything. But as they were getting ready to move forward, Choe had a change of heart.

People suffering from addiction and mental health issues, according to Porch Light, are better served when they’re not only given the personal goal of self-betterment, but the goal of improving their community.

“We thought about setting up a business. But as you know, Kensington is so crazy down here—a lot of drugs and drug dealing. I wanted to help improve the neighborhood,” says Choe. “When I heard that Mural Arts wanted to rent the place I was like ‘Well alright! Good!’ I was an art student back in the day, at the University of the Arts. I believe that art can change people.” Mural Arts has committed to working out of Choe’s storefront for at least two years.

Time will tell if Kensington’s new Porch Light storefront will lead to real improvements in the neighborhood; it should at least beautify it. But if the turnout at the grand opening is any sign of things to come, enthusiasm is high. People are milling about, asking questions of Mural Arts volunteers about what’s to come; that air of genuine, nearly relentless positivity clings to everything.

Johny Solis can feel it. He’s a Kensington dude, born and raised; he says he’s had his own “trials and tribulations,” but he’s recently returned to the neighborhood from Flagstaff, Arizona refreshed and renewed. He currently works as a chef and he’s happy to see Mural Arts moving in. He even explains the concept to some passersby as we chat; he’s at least as popular with the locals as Councilwoman Quiñones-Sanchez, possibly more.

“It’s a great neighborhood, one of the best, but it’s a drug-ridden community,” he says. “When things like this happen, it’s a blessing.”