Home » Technology » Get Your Fix On 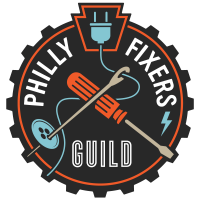 Technology and innovation in Philadelphia

Below are some of our most recent stories. You can read all of our coverage on technology and innovation here.

Meet the Disruptor: Message Agency
As B Lab holds its annual retreat this week, the local web design firm talks about staying true to the values that made it a "Best for the World"—social good and less greed
Meet The Disruptor: Stacey Mosley
The city data scientist-turned-entrepreneur is taking on blight … because someone’s gotta do it
Ideas We Should Steal: A day in court without leaving home
Michigan and Ohio courts use an online system to adjudicate simple cases in a fraction of the usual time. In Philly, it could resolve over 450,000 cases a year

Philly Fixers Guild, in the words of co-founder Holly Logan Get Your Fix On

Get Your Fix On

Ever been to the dump in South Philly? If so, you might have noticed something: It’s not a junkyard; it’s a junk graveyard.

Piles of TV’s and audio equipment sit waiting to be repurposed, often only jettisoned because they needed a bit of tender love and care. Not surprising, considering that the U.S. produced 3.14 million tons of electronic waste in 2013. Similarly, small mountains of furniture make an appearance, and most of it seems imminently-usable—perhaps just missing a part or a bit wobbly.

I dare you: Go to the dump and tell me you’re not just a tad tempted to rescue a bicycle that’s missing a chain, an old turntable or a set of outdoor chairs.

That’s where  the two-year-old Philly Fixers Guild can help. To put it simply: they help you fix your stuff, free of charge, a few times a year at events that they call “repair fairs.” And they can handle  a whole lot of stuff: Fixers Guild co-founder Ben Davis, an airline pilot by day, says they fix  everything from musical instruments to sound equipment to grandfather clocks. They do have limits, though. “Sometimes, people bring an iPhone with a cracked screen, and as much as we’d love to help we just don’t have the material,” says Davis.

“The inherent goal is more environmental consciousness,” says Logan. “We’re also trying to equip people with a better understanding of how their items work.”

The Guild, according to Davis, isn’t the first urban volunteer repair outfit; there are similar groups in New York, Seattle, Boston and San Francisco. And the Fixers Guild isn’t Davis’ first volunteer rodeo. Davis and co-founder Holly Logan are both members of Sustainable 19125 & 19134, a Fishtown-based organization that organizes events focusing on environmental consciousness and helping  neighbors with “green actions” to help eliminate needless waste.

Always on the lookout for new sustainable programs, Davis says he saw reports of “repair cafes” in other cities starting back as far as 2007.

“We were sure that there was an organization like that in Philly already, because it was such a great idea and Philly’s a pretty progressive city nowadays,” Davis says.

Davis, who has been in Philly for about 12 years, says he and Logan, who works at Temple, hunted around the city for a similar group, but to no avail. So they started their own, holding a first event in 2014; events have been held at a variety of venues, from the Sculpture Gym in Fishtown to Memphis Street Academy.

Davis himself is no slouch of a repairman. “I had a father who was mechanically-inclined, and we had a small boat that we made repairs to when I was a kid, and my grandfather owned a small hardware shop in southern California for 40 or 50 years, and I would work there in the summers,” he says. He learned by doing while working for his grandfather, fixing everything from dishwashers to vacuum cleaners to kitchen pipes.

Still, at the fairs, he doesn’t do much of the actual fixing. “Holly and I are usually busy signing people in and getting people epoxy and thermal fuses, and making sure everything is running smoothly,” he says.

Roughly 85 people have called Davis asking to be volunteer fixers, and Davis says early repair fairs drew up to 110 people. Davis says roughly 50 percent of those who attend the repair fairs go home with fixes.

The kind of kind of hands-on ethos Davis learned working for his grandfather is reflected in the Fixers Guild’s work. See, they don’t just have their volunteer repair people reassemble your broken junk. No, that’d be far too easy. Instead they supervise you while you take apart your busted mandolin or old Super Nintendo, and coach you along.

“When a guest shows up to a repair fair event, we try to get them to make the repair themselves,” says Davis. “We hand them the screwdriver, tell them to take the screws out of the back of that clock radio and say, ‘Okay, now let’s see what’s going on in there.’ Once they do that it really breaks the ice, and shows them that things aren’t immediately disposable.”

“The goal of the repair fair is to have the guest sit with the fixer and walk through a repair to learn something” adds Logan.

Davis may be crazy handy, but he says that he himself has learned from the events. “We’ve had a number of different fixers that specialize in things like vacuum-tube driven amplifier things from 40 or 50 years ago,” says Davis. “I had always kind of understood how those things worked, but there’s a lot of intricacies that go into making them work properly. Through that I’ve learned a bit about electronics.”

Roughly 85 people have called Davis  asking to be volunteer fixers, and Davis says early repair fairs drew up to 110 people. As of now, they draw around 50 per event, with 15 volunteer fixers. The Guild’s most recent repair fair was held on October 22 at Greensgrow Farm in North Philadelphia; they currently host four repair fair events per year. Davis says roughly 50 percent of those who attend the repair fairs go home with fixes.

According to Logan and Davis, the crowd at repair fairs is considerably mixed, drawing guests from North Philly to South Jersey to Maryland. After all, if there’s any cultural universal at all it’s a wobbly desk chair, right? And if, along the way, they learn a little something about being green, all the better.

“Generally, we’re really trying to educate folks in the community to prevent waste,” says Logan. “The inherent goal is more environmental consciousness. We’re also trying to equip people with a better understanding of how their items work.”

The Fixers Guild plans to hold their next event at Fishtown’s PlayArts in late January or early February.