Protect your online privacy, and speak out to our elected officials

The Electronic Frontier Foundation has a page dedicated to ongoing privacy advocacy efforts. Check them out, and support them if you agree with them.

Use these tools to make it harder for the government and companies like Google to track your personal information.

Check out the Pew Research survey on Americans’ Attitudes About Privacy, Security and Surveillance 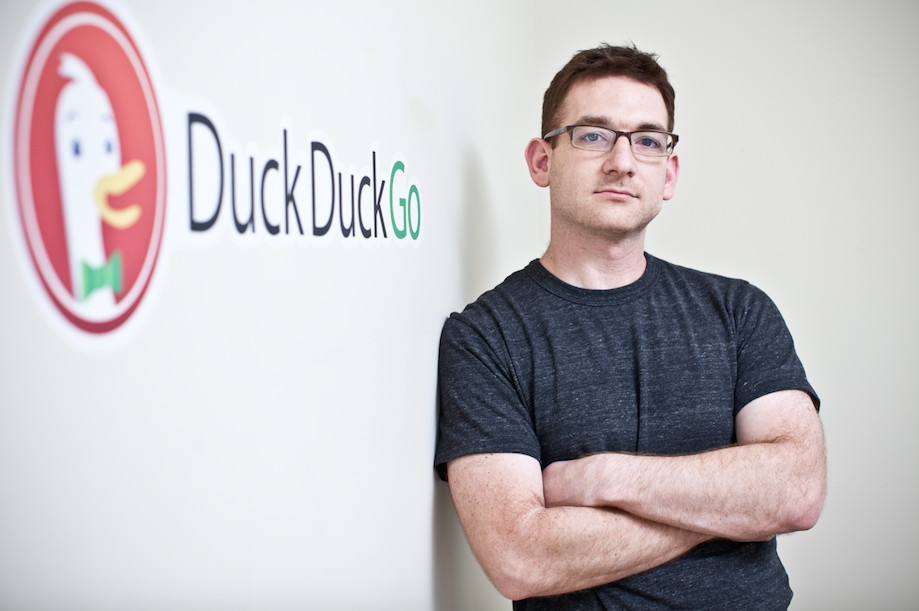 Paoli's DuckDuckGo is taking on Google (with help from Edward Snowden). How'd that happen?

Paoli's DuckDuckGo is taking on Google (with help from Edward Snowden). How'd that happen?

Let’s say you’ve just self-published a book about how to get traction as a startup business, and you now have a dilemma: How do I get traction on my book about how to get traction? You proceed to follow the advice of your own book, which, to your relief, actually works, and it sells way more than your original goal of 10,000 copies—like, nearly four times as much. So when it comes time to establish a new goal for the second-run edition, this time published by Penguin Press, you up the ante further: 100,000 copies.

Of course you do, because you’re Gabriel Weinberg and smashing goals is what you’ve come to expect.

Weinberg, who co-authored Traction: How Any Startup Can Achieve Explosive Growth (due out next week in hardcover), is the CEO of Paoli-based online search engine DuckDuckGo, which—as the book title notes—has had a ridiculous burst of success over the last 28 months. It’s grown by over 600 percent, and some prognosticators believe it poses the biggest long-term threat to Google. According to an article in Quartz last year, DuckDuckGo is the one competitor looking up at Google (way up, to be clear) with both staying power and a growing market share. That’s in part because DuckDuckGo doesn’t store your IP address or sell your information to advertisers (how Google built its empire) and can’t be infiltrated by the government—an increasingly popular stance in a post-Snowden world.

Soliciting advice from his own book might have been the most straightforward marketing decision Weinberg has ever made. And that’s saying something for DuckDuckGo, a company that’s made a name for itself by striking a bullseye with unconventional moves. “Part of the real lesson for the book—and this is a challenge for most people attempting to get traction—is that underutilized channels for your industry are generally the best ones,” says Weinberg. “People underutilize things that are outside your comfort zone.”

Case in point: In 2011, Weinberg and his team of zero employees (the company has since grown to 35 employees) hatched an idea to place a billboard over California Highway 101, directly on the commute from San Francisco to Google HQ, for the modest price of $7,000. Most online search-engine companies would snuff at the idea of using Gilded Age advertising methods, but not Weinberg. It turned out to be the first inflection point of DuckDuckGo’s rise to prominence. Stories appeared in Wired, Business Insider and USA Today—showing the image of the billboard’s cartoonish duck wearing a bright-red bow tie quacking at the industry leader: “Google tracks you. We don’t.”

Therein lies the answer to why so many people are switching their search-engine allegiance from Goliath to David. On DuckDuckGo, there are no cookies following you all over the Internet. Nor does the website save your search history. There aren’t even log-ins for users—so even if you wanted to hand over personal information to Weinberg as a token of your appreciation, you couldn’t. The duck’s five words said it all. “We only bought that one billboard,” Weinberg says.

Six months later, the company’s traffic had doubled to 8 million search queries a month. Traction continued to pick up, subtly but steadily, until June 2013—when Edward Snowden, well, happened. Suddenly, forking over your personal data to Google wasn’t so cool, not when the government was also prone to scooping it up. And that created a lot of new converts to DuckDuckGo. Four years later, its traffic stands at well over 8 million queries per day. Or, as Weinberg estimates, close to one percent of the search market. (It’s a guessing game because Google doesn’t release its numbers publicly.)

Sure, Weinberg was lucky. He admits that much. But he also maneuvered DuckDuckGo in a smart and frugal and—most of all— stubborn direction that other search engines with the same premise lacked. Remember the search engine Cuil? Yeah, me neither. It also promised to not track users’ data but managed to flame out two years after launching in 2008, despite having established Silicon Valley executives and a bevy of startup money. Weinberg, on the other hand, was a stay-at-home dad who started his company in the same year as Cuil. Look where he is now—okay, he’s in Paoli, yes, but also, thriving.

DuckDuckGo is the one competitor looking up at Google, with both staying power and a growing market share. That’s in part because DuckDuckGo doesn’t track you online or sell your information to advertisers or collude with the government—which is an increasingly popular stance in a post-Snowden world.

All those other search engines that took aim at Google by boasting no-tracking functions made one of two critical mistakes, according to Weinberg. They either raised a lot of money too quickly and burned it too quickly, or sold out to a larger company before maximizing their traction. “There was room to stick around,” he says. “People give up on their ideas too quickly.”

DuckDuckGo didn’t even begin as a no-tracking company. Back in 2007, Weinberg was looking for his next big venture after selling a social-networking company called The Names Database to classmates.com for about $10 million. That was not long after graduating from the Massachusetts Institute of Technology with a bachelor’s in physics. He was naturally inclined to data and algorithms, although that translated into having roughly a dozen projects (not including his toddler) all going at once, until he landed on the idea to start up a search engine. “I myself was dissatisfied with my Google results,” he says. “There was too much spam and not enough instant answers.”

A lot of people have shared Weinberg’s frustration with Google’s search algorithm. It’s come under fire for being maddeningly opaque and biased in various lawsuits against the company in both Europe and the United States. While the algorithm at DuckDuckGo is also a company secret, Weinberg aims to revolutionize the online information game by providing “Instant Answers.” For example, when you search “It’s Always Sunny in Philadelphia” on DuckDuckGo, not only will you receive the familiar stream of links, there will also be a paragraph-length explanation at the top of your page about the show (from a source like Wikipedia), along with a link slapped with an “official site” tag, pointing you to the television show’s bona fide website.

These designations are designed to save users time, and also, enable a sense of transparency in DuckDuckGo’s process. Most of the Instant Answers are created by coders around the world, an open-source community that Weinberg also credits with improving the site through suggestions, similar to how Wikipedia crowd-sources. Though not every search query has an Instant Answer right now, Weinberg believes DuckDuckGo will get there over time. “Our long-term vision is to give you Instant Answers from thousands of the best sources across the Internet, in every niche category: Lego parts, municipal bonds, anything,” he says.

Are these cute novelties enough to bring down Google? No, of course not. At least not on their own. But there’s pent-up demand for an upstart rival in the industry, and years ago, Weinberg positioned DuckDuckGo to be the obvious choice.

About a year into running the company, Weinberg, who has a Masters in technology and policy from MIT, decided that DuckDuckGo would not collect personal data from users, meaning if the NSA issued a FISA letter asking to turn over information, he had nothing to show the government. At first it was a personal decision. It was also one that had the chance to gain traction.

When he sought out a first round of venture capital money in 2011, the privacy pledge resonated with investors. At that point, Weinberg realized he was tapping into a deep-seated sentiment. “We’ve put limits on financial technology, medical technology, agricultural technology, but we have no limits on digital-tracking technology,” says Weinberg. “As a society, we will eventually place limits on it. The pendulum will swing back and that’s obviously happening now.”

This spring, in a Pew survey asking Americans for their opinions on online privacy, 40 percent said that search engines shouldn’t record any information about their activity. Further, the people who claimed to have “heard a lot” about government surveillance were much more likely to have stronger views in support of privacy—suggesting that the more people find out about how their data is being used, the more they believe in DuckDuckGo’s moral ground.

It’s too simplistic to chalk up DuckDuckGo’s success to a then-29-year-old international fugitive, although Weinberg is quick to thank the Snowden revelations, either directly (“It probably accelerated our grown by years,” he says.) or indirectly. “There’s this concept I really like called luck surface area … it’s basically being willing to embrace serendipity and opportunity,” Weinberg says. “You’re increasing your luck surface area by being open to that and experimenting. I try to do that all the time.”