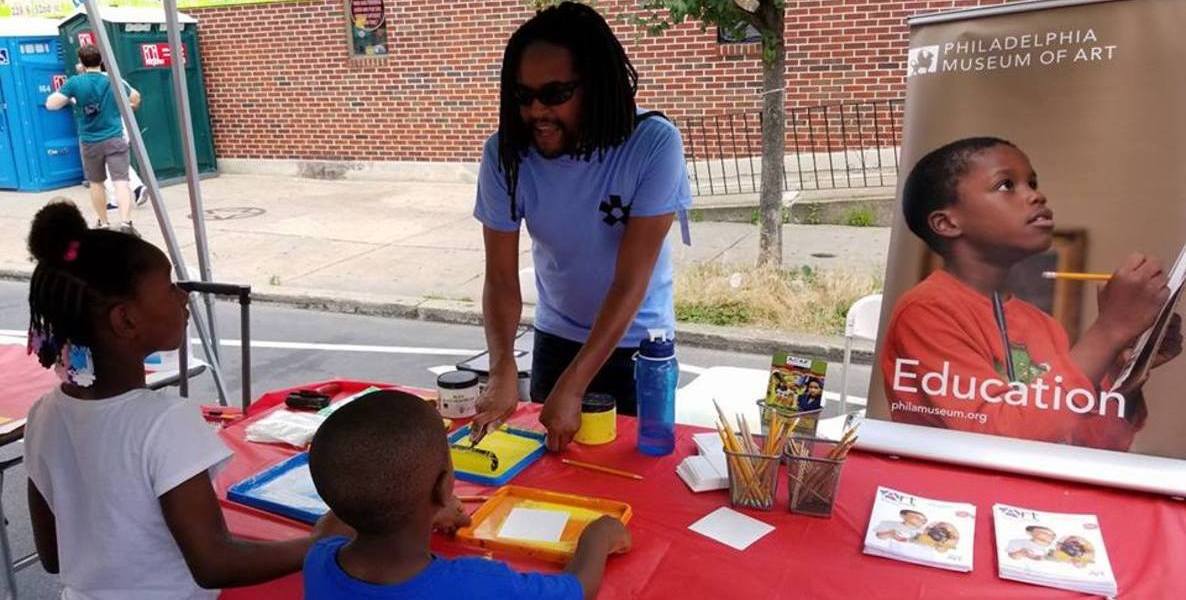 A groundbreaking Museum of Art exhibit takes art to the streets, combining it with advocacy. This isn’t your grandfather’s PMA

A groundbreaking Museum of Art exhibit takes art to the streets, combining it with advocacy. This isn’t your grandfather’s PMA

A festival on a two-acre farm in North Philadelphia, created on the site of a former dump. A play at the community garden of an affordable housing project in Kensington. A retrofitted shuttle bus, called The Mobile Futures Institute, traveling along a predetermined city route and functioning as an itinerant installation exploring Philadelphia’s social issues and history. These are not the events that Philadelphia Museum of Art members expect to see on the calendar when they read the museum’s monthly newsletter.

But this summer, these events and the ideas they represent are part of what may be the most radical exhibition in the PMA’s recent history: Philadelphia Assembled, a collaborative and socially engaged art project that combines art with advocacy and takes place outside the classically inspired walls of the city’s premier art institution.

The first exhibition of its kind at the PMA, Philadelphia Assembled was initiated by Dutch artist and curator, Jeanne van Heeswijk, after Carlos Basualdo, the museum’s Keith L. and Katherine Sachs Senior Curator of Contemporary Art, invited her to create a project here. Museum-goers accustomed to viewing paintings and sculptures in a gallery setting might be puzzled by this project—which includes, among other events: storytelling sessions about the history of gentrified areas, a marketplace of local urban creators, and even a seed swap.

The project focuses more on creating opportunities for discourse than the creation of art objects, but those made for and collected during this city-wide project will be exhibited at the museum’s Perelman Building in September (with daily pay-what-you-wish admission).

Museum members might also be confounded by the big question that the project asks Philadelphians: How can we collectively imagine our futures?

“The initial provocation of Philadelphia Assembled was, How does the museum relate to this changing landscape of Philadelphia?” explains Amanda Sroka, the museum’s Assistant Curator of Contemporary Art. “What is the place of this encyclopedic institution within the city that it inhabits?”

Each of the project’s over 160 collaborators may answer differently, but what is clear is that that the PMA is trying to be relevant to a broader audience. Philadelphia Assembled follows the museum’s other outreach attempts, such as Inside Out—an exhibition of large-scale replicas of collection highlights in neighborhoods in and around Philadelphia. But instead of exporting “high art” outside of the PMA, Philadelphia Assembled imports public discourse into the museum. As part of its new strategic vision, the museum hopes to offer programming and exhibitions that are relevant and meaningful.

Philadelphia Assembled is a collaborative and socially engaged art project that takes place outside the classically inspired walls of the city’s premier art institution. Museum-goers accustomed to viewing paintings and sculptures in a gallery setting might be puzzled by events like the storytelling sessions about the history of gentrified areas or the marketplace of local urban creators.

Van Heeswijk, who is a native of the Netherlands, has spent three years living in Philadelphia in anticipation of the project. “She didn’t think that she could understand what Philadelphia was until she actually talked to people in Philadelphia,” explains Phoebe Bachman, the project coordinator and collaborator.

“So she asked people to introduce her to their neighbor,” continues Bachman, “or their mother, or their colleague. Through this network of affinity, she made new relationships, and these different themes, or ideas, started to pop up over and over again: gentrification and displacement, land sovereignty, alternative forms of economics, mass incarceration, climate change, and our Philadelphia public school system.”

Many of the people that Heeswijk met became collaborators, and this collection of artists, gardeners, builders, activists, and community members have spent over a year and a half planning for the project’s events.

But what will happen when the last of the teach-ins, installations, performances, and picnics comes to an end? Will there be any long-term social impact? Will Philadelphia’s grassroots organizers and communities remain assembled?

“This exhibit asks us to rethink the way that not only we think about exhibitions and museums as a civic and cultural space, but it’s also asking us to think about the way that we work and the processes that go into exhibitions themselves,” says Amanda Sroka, PMA Assistant Curator of Contemporary Art. “ And who’s at the table when we’re making decisions.”

“I think my work is known for its duration,” says van Heeswijk, “but I always say, I don’t see it as ‘how long can you stick around.’” Instead, she hopes to build sustainable communication channels between local organizers so that they can collectively make a change. “I think we’re in the process of doing that right now.”

One of the collaborators, Jeaninne Kayembe, is an artist and co-executive director of Urban Creators, an urban farm and educational organization in North Philadelphia. “How can we work like this collectively, as a community?” Kayembe asks. “Because sometimes these projects are only in it for a little bit. But we hope that this art inspires so much and speaks in a way that will make a long-lasting impact, of course.”

Another collaborator, Nora Lichtash, has advocated for affordable housing in North Philly for almost forty years and is the executive director of the Women’s Community Revitalization Project (WCRP). WCRP has collaborated with Philadelphia Assembled and other affordable housing advocates to create “Blueprint for a Just Neighborhood”, a public presentation space that resembles the wooden framework of an affordable house. She believes that the current exposure that Philadelphia Assembled lends to grassroots organizations is a useful tool, but agrees that truly lasting effects come from community organizing.

“Combining the art with the organizing feels like an effective strategy,” Lichtash says. “I’ve been a member of the art museum, I care about the art museum, but I don’t see the overlap that often. I think this overlap makes a current difference. I don’t think it means that rich people from the art museum are going to care forever about this, it’s yet to be seen.”

And it is still unclear whether Philadelphia Assembled has been more successful in exposing its typical visitors to new ideas, or in making the museum more accessible to new audiences.

Michaela Pommells of CoRaJus (the Coalition for Racial Justice) has been facilitating workshops about the history of gentrification and displacement in Philadelphia for roughly six years. She co-led a similar workshop in which Philadelphians shared their experiences of gentrification, called a Displacement Teach-In, in collaboration with Philadelphia Assembled and other community organizations on June 22nd.

“Given [the museum’s] network, there’s a possibility for there to be even more people drawn to the event,” says Pommells. “I think there’s a lot of excitement about Philadelphia Assembled, just the conversation and the narrative that’s swirling around Philadelphia right now has people really excited. I know on the Facebook page there’s a massive number of people who say they’re going to be there. I’m very aware of what that means in reality, that it’s usually about 20 percent of that.”

No matter the ultimate attendance numbers at the events, the museum is liberally sharing its spotlight with organizations generally invisible to its membership roster while communicating, through action, that the museum can be a place where all Philadelphians feel welcome.

“For the museum, this is an amazing and incredibly ambitious exhibition unlike, really, anything institutionally that we’ve tackled before,” continues Sroka, the PMA’s Assistant Curator of Contemporary Art. “It’s asking us to rethink the way that not only we think about exhibitions and museums as a civic and cultural space, but it’s also asking us to thoughtfully and intentionally think about the way that we work and the processes that go into exhibitions themselves. And who’s at the table when we’re making decisions.”

When the summer’s events end and the subsequent exhibition at the Perelman building closes in December, its collaborators will no longer be able to meet at the PMA’s table. It is Van Heeswijk’s hope that Philadelphia Assembled will have successfully built a new table, big enough for a growing number of community members and of durable, long-lasting quality. (More than) some assembly required.