Donate to RIP Medical Debt’s Helping COVID Heroes Fund; your money will be used to identify, buy and abolish the medical debts of healthcare professionals and other first responders on the frontlines of the pandemic.

Join a campaign, like the one in Pennsylvania, to help folks struggling with the weight of medical debt. Or start a campaign (scroll to the bottom of the page) and raise money to help members of your own community.

Our healthcare woes (and solutions)

Business for Good: Quil Health
Could a joint venture between Independence Blue Cross and Comcast herald the solution to our country’s healthcare woes?
A low-cost EpiPen to ward off Rising Healthcare Costs
In today's Solution of the Day, a Maine doctor devises an affordable alternative to the lifesaving drug, which has skyrocketed in price.
Meet the Disruptor: Roy Rosin
Penn Medicine’s guru of innovation may be the smartest person in Philly you haven’t heard of
WATCH: Health care disparity in the age of Covid-19
The most recent online Citizen event explored the deplorable state of racial inequality in health care, and what we can do about it
Texting To The Rescue
A team at Penn Medicine may have found a way to save hundreds of new moms’ lives with a simple—but incredibly effective—tool 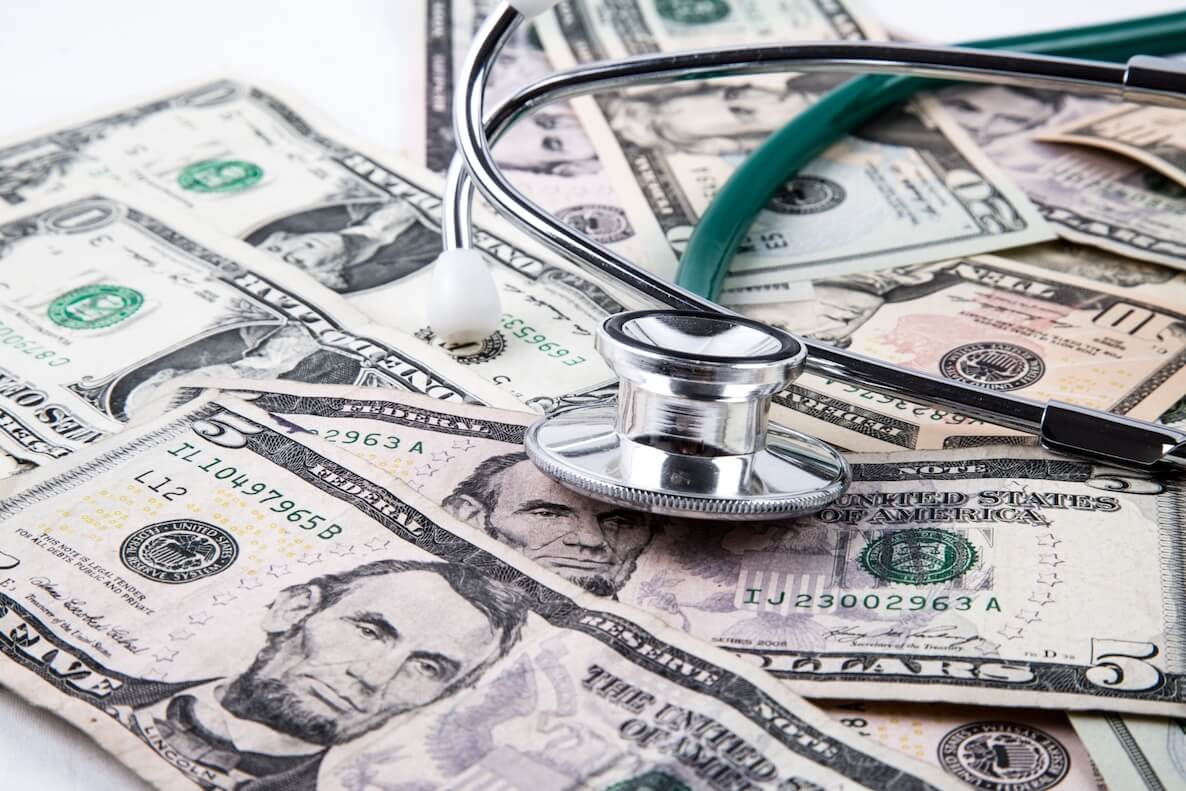 A third of Americans have medical bills they cannot pay. A New York nonprofit has helped eliminate $2 billion of that debt for the poorest of them

A third of Americans have medical bills they cannot pay. A New York nonprofit has helped eliminate $2 billion of that debt for the poorest of them

decades of working low-paying jobs, with no health insurance benefits, Dreama Shaeffer—like thousands of other Americans—found herself early this year with thousands of dollars of medical bills she was unable to pay.

A 54-year-old single mom, Shaeffer had bills that stemmed from injuries her now grown son suffered as a child; from doctors appointments to treat her early-onset osteoporosis; from a three-year-old emergency in which she stopped breathing and had to get an ambulance to the hospital.

Every month for years, bills arrived; she paid a few dollars here and there, but mostly, she glanced at them anxiously and put them aside. “I’m paycheck to paycheck, and don’t have money for extra bills,” Shaeffer says. “It’s not like I’m a bad person. I just don’t make a lot.”

One day last February, Shaeffer’s mail included something that she almost threw away because it looked a lot like junk, in a bright yellow envelope. Inside, though, was nothing short of a miracle: A letter, from the New York-based nonprofit RIP Medical Debt, alerting Shaeffer that $1,000 of her debt had been wiped out. Just like that.

“I happened to get that letter two weeks after I ran from an abusive relationship,” says Shaeffer. “I literally started crying. It was the best thing that happened to me in a long time.”

That day, Shaeffer joined thousands of other Americans in all 50 states who have had their hospital bills wiped clean by RIP Medical Debt, a nonprofit started by two former debt collectors, Craig Antico and Jerry Ashton, in 2015. In the last five years, using small and large donations, Antico and Ashton have zeroed out over $2 billion in medical bills averaging about $1,200 each, for more than 650,000 families; they are aiming to hit $3 billion by the end of 2020.

They do it by adapting the same method they used as bill collectors throughout their careers: They pay hospitals a fraction of what’s owed for a bundle of unpaid bills. Then, rather than collecting the money from patients, as they used to do, they forgive the debt. “We became,” Ashton says, “predatory givers.”

And, Antico adds, “I’m happier than I’ve ever been.”

All across America, there is some $300 billion in medical bills that are outstanding and can’t be paid, according to Antico. Much of that is at hospitals, which are willing to sell off the debt in bulk at a discounted rate to collections agencies in order to recoup at least some of their money; even a fraction of something is better than nothing, after all. This discounted rate is not available to consumers because, for instance, a $100 payment on a $10,000 bill would not be worth it to a hospital. But RIP Medical Debt buys in bulk, at a minimum of $10,000 per transaction—a threshold that just satisfies hospital accountants. That allows for huge debt relief: Every $1 the company pays is worth $100 in money owed.

That is especially good news for patients who have their debts forgiven just by virtue of being in the group of bills RIP Medical Debt bought from a medical provider. They don’t have to apply. To qualify all they need is to owe money; be two times below the poverty rate; have assets worth less than their debt; or have a hardship such as paying 5 percent of annual income for out of pocket expenses

Those qualifications apply to far too many Americans. According to a 2016 New York Times/Kaiser Family Foundation survey, one in four Americans struggled to pay a recent medical bill. A more recent survey puts that number even higher—at one in three Americans, or 137 million people. In the Philadelphia area alone, according to an NBC10 report two years ago, 1.1 million people owe $631 million in medical debt.

A third of Americans put off medical care because they are afraid of the cost—which can lead to more serious health issues, and steeper bills, later. Healthcare bills are the primary reason Americans consider taking money from retirement, or filing for bankruptcy. And, of course, the poorest Americans—those in poverty, or who may not even have a couple hundred dollars on hand for emergencies—are the hardest hit by healthcare costs.

The consequences go beyond just financial. The burden of debt causes anxiety, shame and the sort of absurd choices that come to define a household—health care bill or medicine, food, rent. “It’s stressful, there’s a stigma attached to it, and the bills are so high we can’t even expect people to pay it,” Antico notes.

Antico and Ashton both spent their careers as debt collectors, in an industry where more than 50 percent of all debt is medical. Ashton worked in the field for about 40 years, mostly helping doctors’ offices collect on their bills. “I always felt that we were the guys with the white hats,” he says. “These doctors were small business owners, who needed to be paid so they could pay their own bills.”

It wasn’t until Occupy Wall Street that Ashton and Antico, who by that point had worked together for about six years, became “enlightened” about the financial disparity around them—and of how their work was feeding into that. “I didn’t realize until then how much destruction the debt was causing,” Antico says.

“The storyline was righting wrongs, showing the financial disparity and horridness of that, that it had to change,” Ashton recalls. “Craig and I looked at each other and thought, this is a good place to start.”

Ashton set about reconfiguring the software he used to collect debts to pinpoint those most in need and instead send them forgiveness letters. They launched with their own money and  money from a founding board member, Robert Goff. Now, many of their buyouts come from crowdfunding efforts at churches and other community groups that RIP Medical Debt helps to run.

In Cincinnati, for example, the megachurch Crossroads recently raised money from its congregation to wipe out more than $46 million in medical debt for 45,000 people in Ohio, Kentucky and several other areas. NBC/Telemundo ran a campaign at stations around the country in 2018 that targeted about $631 million in medical debt—including in the Philadelphia region, where the station eliminated more than $2 million owed by local patients.

RIP Medical Debt has several open campaigns from all over the country and also operates a general fund to which donors can contribute, and which Antico and Ashton use to target certain areas or populations: Houston after Hurricane Harvey, first responders and, now, areas and people hit hardest by Covid-19.

And they want to do more: They’ve launched two research projects to help determine the way they can be most effective moving forward; they wrote a book with Goff called End Medical Debt: Curing America’s $1 Trillion Unpayable Healthcare Debt, which unpacks the myriad problems with and solutions to the American healthcare system; and, along with academics from University of Chicago, UCLA, Berkeley and MIT, they bring together activists, debt collectors, government officials, nonprofits and hospitals for an annual Economic Impact Summit to address the same issues.

“We see our role as bigger than buying debt and forgiving it—that’s like sweeping up after the parade,” says Ashton. “This is a social challenge because the system is broken—it’s not even a system. All these players have a role in making us get well. What’s not been part of this is addressing financial impact and cost.”

This is—in case you didn’t already realize it—a uniquely American problem. Our $3.5 billion healthcare industry is the most expensive in the world, made up of uneven costs, a patchwork of insurance plans and a baffling array of holes that leave millions of people with burdensome debt just for trying to get well.

“In other countries, there’s a more rational way of pricing healthcare,” she says. “There, if you’re left with a bill, you can pay for it. Here, you can’t.”

This systemic problem will not be solved by RIP Medical Debt—at least not alone. But the lesson, for and from Ashton and Antico, is that they are not alone in this. They are just one part of a solution making life a little easier for hundreds of thousands of people.

“We’re proof that if you can change one person’s mind, they can go out and do magnificent things,” Ashton says. “It doesn’t have to be us vs. them. We just need key people to make change.”

The Citizen is one of 20 news organizations producing Broke In Philly, a collaborative reporting project on solutions to poverty and they city’s push towards economic justice. Follow the proect @brokeinphilly.