Grow, Philly
The vast amount of vacant land in Philly offers a rare opportunity for the city to be a national leader. Can we become our own bread basket?
Try. Fail. Try Again.
The political consequences of failure keep American cities from engaging in real innovation. Can we change that in Philly?
The New Philadelphia Story
The coming age of Artificial Intelligence offers us a chance at reinvention. Will we be bold enough to take it?
The Next Silicon Valley Will Be…Philly?
If we want to become a major innovation hub, we’d better embrace a concept that translates roughly into “love of place”

Talking Trash
The Mayor’s new street sweeping pilot may cause more pollution in our already polluted city. Is this really a solution worth celebrating?
How Not To Clean A Street
Philly 3.0’s engagement director posits that Mayor Kenney’s street sweeping pilot would make air quality worse—just to avoid tough parking politics
Citizen of the Week: Adam Kesselman
The Lafayette Hill resident saw two problems he wanted to address in Philly: Litter and homelessness. He launched City Bright to help with both
Water is Wet
And trash cans reduce litter, according to a new city report. So when, Philly 3.0’s Engagement Director wonders, is Mayor Kenney going to do something about it?
Clean Up, Philly
Philly is the biggest city in the nation with no street cleaning. Instead we have a litter survey. Herein, some actionable ideas 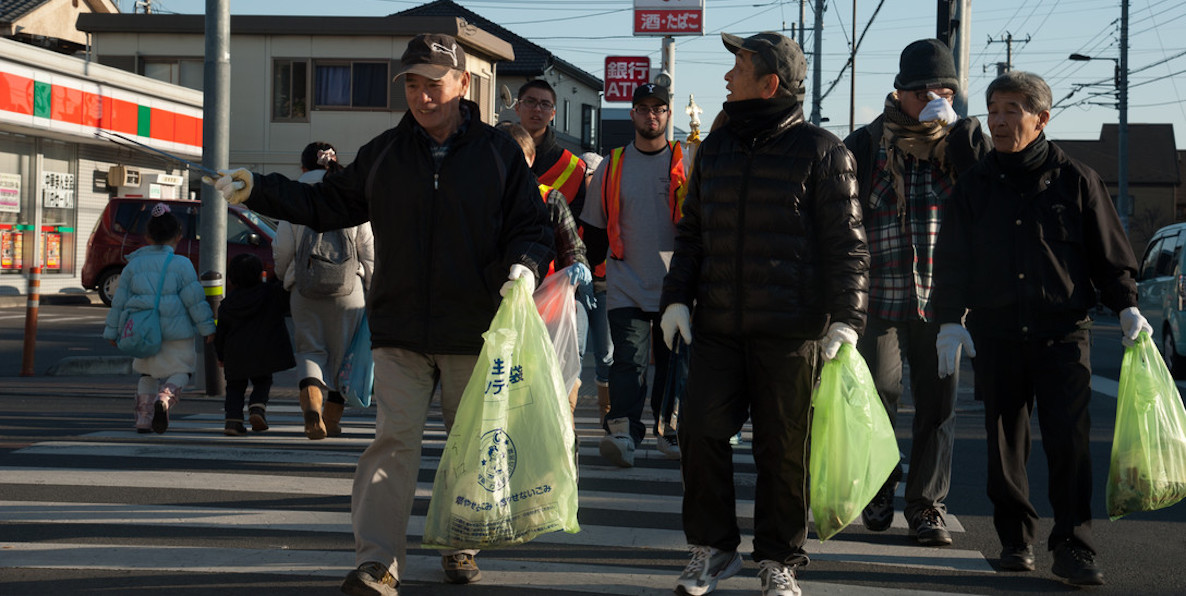 In Japan, being tidy is just considered the right thing to do. Can we be more like that in Philly?

In Japan, being tidy is just considered the right thing to do. Can we be more like that in Philly?

Recently, I had the good fortune to take a whirlwind tour of Japan—eight cities in 10 days. My expectations for the trip were high, but dramatically exceeded nonetheless. Japan is a place like no other in the world; the artifacts, monuments and rituals of its jealously, sometimes militantly, guarded traditions persist alongside the sleek, shimmering towers and pulsing urban life that evoke something out of a near-future science fiction novel. Japan appears to exist in two eras at once: the ancient and the ultra-modern.

I saw more during my brief visit than I could ever hope to describe, but as a Philadelphian, what made an especially big impression on me was something that I didn’t see at all: litter.

Ok, if I’m being honest, I saw four pieces of litter in Japan. But as my wife didn’t hesitate to point out in front of our tour group, the Snickers wrapper and the other three Snickers wrappers had fallen out of my pocket (leftovers from the airport snack shop). But the point remains, in Tokyo alone, a megalopolis of some 9 million people, I saw nary a cigarette butt, petrified gum lump, discarded hair extension, crumpled plastic bag, or any one of the other indiscriminate varieties of consumer and commercial trash that lay across Philly’s streets and sidewalks like a disgusting carpet.

With a self-conception so deeply ingrained that it can be mistaken for patriotism, is it any wonder we don’t care about the waste and ugliness we leave in our wake?

Even more astounding, not only was there no garbage to be seen, nor were there any public trash cans, at least as far as I could discern. (Japanese cities removed trash cans following the 1995 sarin gas attacks, and are only now starting to bring some back.) Here in Philadelphia, those infernal Big Belly machines are either clogged to the gills with dog waste bags, or treated with haughty contempt by pedestrians who make a point of chucking their trash on the ground as near as possible to, but not in, the can.

So what do the urban Japanese do with their empty food wrappers, beverage cans and other assorted personal detritus? I asked around; are there draconian punishments for littering? No, the locals told me; people just take their trash home and dispose of it there (according to complex and uniformly followed recycling guidelines). And why wouldn’t they? To the Japanese folks I inquired with, the prevailing thought is that your mess is your own, and it’s yours to clean up.

I later learned that this preposterously reasonable attitude toward personal responsibility, at least as far as cleanliness is concerned, extends throughout Japanese society. Not just individuals, but households, businesses, neighborhoods, and any discernible unit of organization, consider it an obligation of personal and social respect to maintain an acceptable level of tidiness. It would be easy to jump to the conclusion that this mentality could trace its roots to some ritual of archaic mysticism. But no, I was told, it was nothing so arcane; Japanese people just tend to prefer cleanliness to dirtiness, and order to chaos. Hardly an exotic way of thinking.

But even if the collective predilection for keeping tidy could be tied to some millennia-old philosophy of other, the fact remained that Japan has not always been a bastion of impeccable hygiene. As the country industrialized at hyper speed in the years following its devastation in World War II, garbage became a major national problem. Tokyo, for example, produced so much refuse that it quickly ran out of useable landfill space. The government intervened in the 1990s with a regime of strict waste management legislation, including strict recycling laws and broad restrictions on the kinds of refuse that could be deposited in landfills. The intervention worked: today, Japan recycles nearly 77 percent of plastic waste, compared to a shameful 20% here in the United States.

I was beyond surprised to learn that Japan had somehow fully assimilated itself to anti-garbage culture in the span of less than 80-years. Now, it’s not as if the U.S. doesn’t have plenty of laws, many of which involve hefty penalties, against littering and other improper waste disposal. So why can’t we get it together to clean up our act? Trying to answer that question other than rhetorically is bound to be wildly reductive, but in the end it may just come down to manners (and doesn’t it always?).

Messiness may be a necessary condition for the willingness to thwart conformity and order that have made America a bastion of creativity and innovation in the world.

Overt displays of courtesy and deference have long been a hallmark of interpersonal relations in Japanese culture. Such gestures, and the weight attached to them, imply a thoroughgoing sense of social obligation, underscoring the notion that we aren’t to interact with others however we want, but according to a commonly accepted set of rules that binds us to something greater than our own impulses and reflexes. This is not to say that Japan by any stretch is a social utopia—far from it—but it does stand in contrast to America’s self-romanticized culture of rugged individualism; a collective mindset that dismisses the collective altogether, a national philosophy that to be American is to look out for number one and number one alone. With a self-conception so deeply ingrained that it can be mistaken for patriotism, is it any wonder we don’t care about the waste and ugliness we leave in our wake?

Of course, Americans’ thoughtless sloppiness as a people speaks to the pathologies of our individualist culture, but there may be something to the argument that messiness itself isn’t a bad thing. In fact, it may be a necessary condition for the willingness to thwart conformity and order that have made America a bastion of creativity and innovation in the world. A study by University of Minnesota psychological scientist Kathleen Vohs found that in an experiment where subjects were asked to come up with 10 novel uses for ping pong balls, the volunteers who worked in a messy room produced more, and more creative, ideas than their counterparts who brainstormed in a tidy room. Likewise, subjects occupying a messy lab who were offered a choice between a “new” product and a “classic” one were more likely to choose the “new” option than were those individuals being studied in an organized room. Vohs’ experiment seems to bear out Einstein’s remark: “If a cluttered desk is a sign of a cluttered mind, of what, then is an empty desk a sign?”

To be sure, the historical, cultural and sociopolitical distinctions between Japan and the United States are significant, and the characteristics of each likely has a significant bearing on our respective inclinations toward order and disorder. But we’re all still people, and the relative recency of Japan’s turn toward a litter-free society does suggest that we can change our collective neural network. On the other hand, it may be that Americans’ sense of ourselves as pioneers, blazing trails and leaving a path of detritus behind us, is what allows us to thrive amidst chaos, particularly chaos that we create ourselves. I would suspect that the right formulation is somewhere between the two. Maybe we need to make a mess to move forward, but that doesn’t mean we can’t clean up after ourselves.