Home » Arts & Culture » Ideas We Should Steal: Collective Giving for the Arts

How did the free admissions program come to be?

The path to free admission—one way to get a broader audience to the arts—involved a combination of foundation and small private donations.

About "The 50" who made museum admission free

Read cincinnati.com’s story about the group of young donors to the Contemporary Arts Center that provided for free admission. 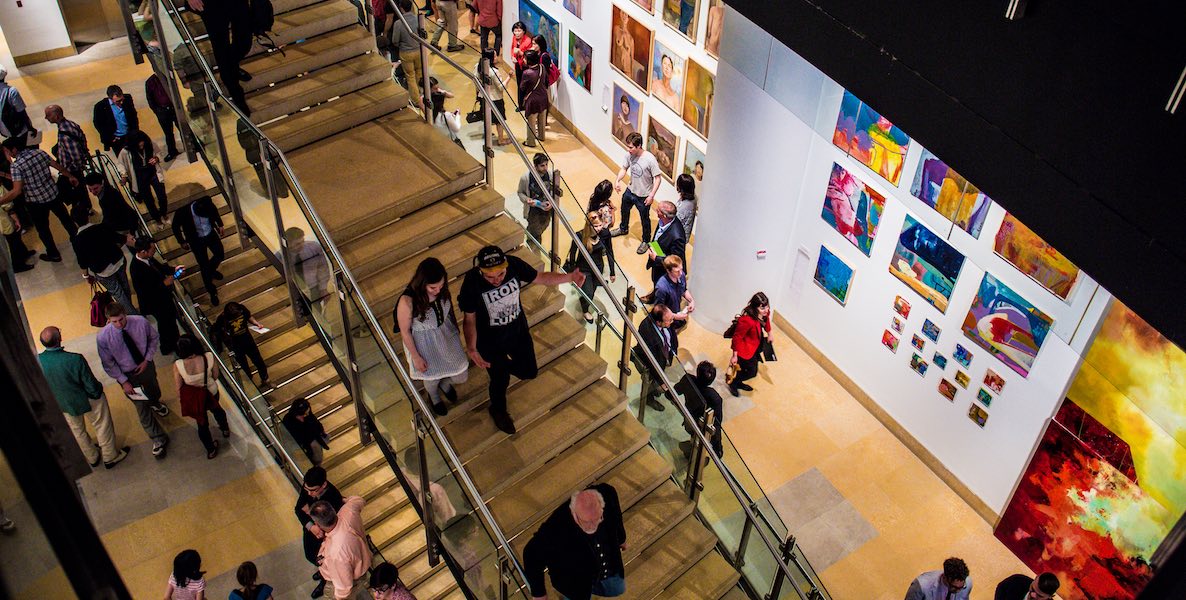 Ideas We Should Steal: Collective Giving for the Arts

A coalition of young Cincinnatians joined together to fund free museum entry. Could that be the path to make arts in Philly more accessible?

Ideas We Should Steal: Collective Giving for the Arts

A coalition of young Cincinnatians joined together to fund free museum entry. Could that be the path to make arts in Philly more accessible?

While the lobby at Cincinnati’s Contemporary Arts Center was undergoing renovations last winter, visitors were forced to navigate a labyrinthine path to reach the exhibits in the 10-year-old Zada Hadid-designed building. To compensate for the detours and debris, the museum offered free admission during the two month construction period.

As the new lobby’s unveiling neared, executive director Raphaela Platow proudly led one of the museum’s funders around, explaining where the new cafe would be and describing the lighting installation that would animate the formerly bland space. Then she revealed something else. “She said: ‘You know, the craziest thing has happened since we made admission free,’” recalls Amy Goodwin, the CEO of the locally based Johnson Foundation. “‘Attendance has doubled.’”

Impressed, Goodwin asked Platow what it would take to keep admission free, and offset the loss of membership dues. The answer: $75,000 a year, a third of which Goodwin knew her foundation could contribute. “We started brainstorming about where we’d find the other $50,000,” she says.

A lightbulb went off. “I’m 37, and I thought: I don’t have friends who can give $50,000,” Goodwin continues. “But I  do have some amazing people in my social network who believe passionately in the city and would welcome the opportunity to get involved. So—maybe I have 50 people who would give $1,000 each.”

The museum leadership loved the idea of making the ask of an age group that is finally enjoying disposable income. “For us, the idea of a Young Friends’ or a Young Collectors group didn’t seem like the right fit,” says Platow, 43. “We’re not a traditional museum and we already attract younger museum-goers. It was more about creating a framework for having them get closer to the institution.”

Within three or four months, and with nothing more than word-of-mouth, “The 50” had been assembled, each between the ages of 25 and 45 and each promising to contribute $3,000 to ensure three years of free admission. “For us, the big takeaway is ‘proof of concept’,” says Goodwin. “Yes, young people do want to get involved and are engaged. But they want to see where their money is going. This was a super-tangible way to do that.”

As for the other part of the equation—visitors—not only does free admission make it more feasible for people to spontaneously dip into the museum for, say, 20 minutes on their lunch break, it also eliminates cost as a factor, period. “By nature, the CAC is about exposing the public to different ways of looking at art and life,” observes Goodwin. “And the idea of bringing that privilege only to those who can afford it doesn’t align with its mission.”

50 Cincinnattians, each between the ages of 25 and 45, have promised $3,000 to ensure three years of free admission. “Young people do want to get involved and are engaged,” says one donor, Amy Goodwin.  “But they want to see where their money is going.”

Right now, it’s working, both financially and from an attendance standpoint. “Revenue from the old $7.50 admission has been replaced by the donations from people who hadn’t previously given,” Platow says. “And new people are coming. The first weekend, 40 percent of visitors had never been to the CAC.”  Plus, the museum still offers memberships, re-shaping the benefits package to include free admission to ticketed events and programs, and free valet parking.

Interestingly, Cincinnati has a precedent of sorts in its decades-long ArtsWave

program, which turns to the community to raise money for the arts via workplace- and dining-related campaigns and other initiatives. Last year, ArtsWave set a national record by raising more than $12 million from 42,000 donors.

In Philadelphia, the closest we have are programs that offer free or discounted tickets funded by one family or foundation, not by a crowd. Penn’s Institute of Contemporary Art, for example, has been admission-free since 2008, thanks to a private donation from Amanda and Glenn Fuhrman. Free admission at the Delaware Center for Contemporary Arts in Wilmington is underwritten by DuPont. And last fall, the Barnes Foundation announced that, thanks to a grant from an anonymous donor, it is now offering free weekday admission to college students. So far, 3,500 college students have taken advantage of the program.

Similarly in the performing arts, a grant from the Wyncote Foundation enables the Wilma Theater to offer tickets at the subsidized rate of $25 for the general public and $10 for students. And PNC’s Arts Alive initiative has for the past few years helped present Opera on the Mall, a free taped performance from Opera Philadelphia.

Maud Lyon, president of Greater Philadelphia Cultural Alliance, a membership organization which advocates for arts organizations, point outs that “members of Philadelphia’s rich cultural community are adept at forging their own path and doing their own fundraising.” A deep pool of foundations and individual donors have also established a long history of giving here.

In Philly, the type of collective giving Goodwin spearheaded among her young friends in Cincinnati could give more young philanthropists a way to contribute and offer at least discounted tickets to more potential audiences. We asked the Barnes, Pennsylvania Academy of Fine Arts, the Art Museum and the Opera how much money that would take. We haven’t received any answers, yet.

At the same time, the old established cultural groups in town—the Art Museum, Philadelphia Orchestra, Pennsylvania Ballet and Opera Philadelphia—are looking to expand their base of both donors and attendees. The orchestra, opera and ballet all hired young, dynamic directors in recent years; all have some programs aimed at drawing a younger, more diverse crowd to their shows. The type of collective giving Goodwin spearheaded among her young friends in Cincinnati could be one way to do that, giving more young philanthropists a way to contribute and offering at least discounted tickets to more potential audiences.

How much money would that take? We put that question to the Barnes, Pennsylvania Academy of Fine Arts, the art museum and the opera.

We haven’t received any answers, yet. It seems like the Philly Problem in a nutshell: Things move slow around here, ideas need to be kicked around longer.

“In a smaller city like Cincinnati, it might have been easier to ask new donors to focus on one specific, relatively small institution like the Contemporary Arts Center,” Lyon continues. “What they did in Cincinnati sounds like a fantastic idea, though. They’ve proven that the research on what inspires young donors to get involved is true. They are interested in funding specific projects and they want their money to have a demonstrated social impact.”