Click here to review an interactive map of all Philadelphia public pools and spray-grounds.

And here to review the schedule and available activities for your neighborhood public pool.

Buchholz took part in the renovation of Fairmount’s Francisville pool last year, a project organized by Ben Bryant, Director of Special Projects at Interface Studio LLC, and funded by the Knight Cities Challenge. Four other city pools took Francisville’s lead, and spruced up their concrete landscapes, under a city project called Swim Philly, which also sponsors activities like yoga poolside.

See pictures of the pools here. 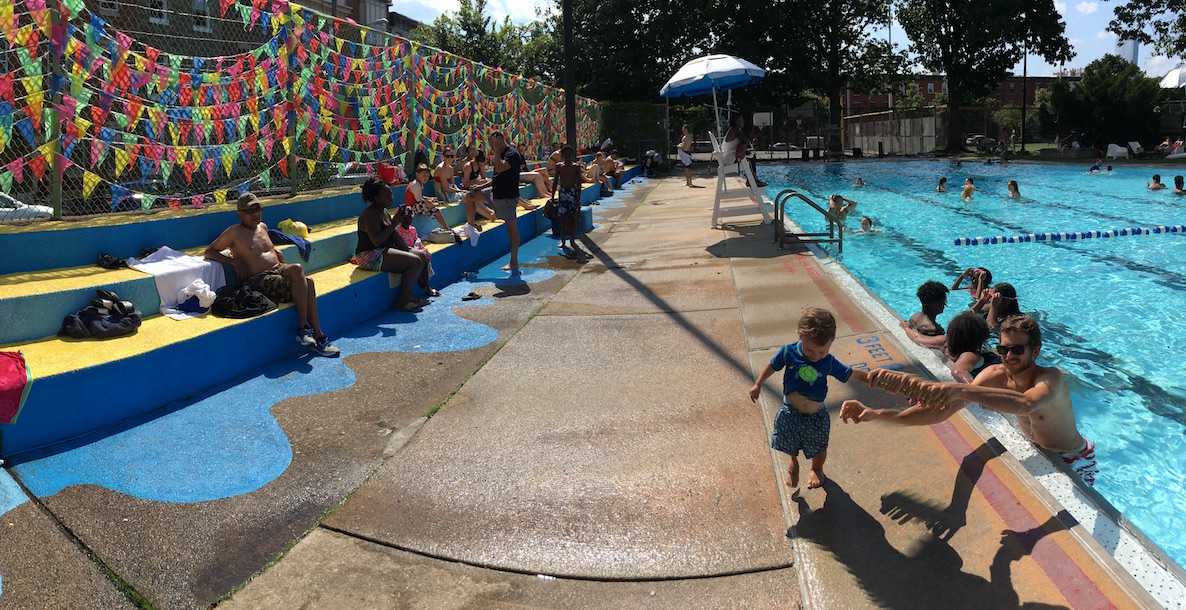 Citizens of the Week: Lauren Summers and Nicole Buchholz

The Grad Hospital residents were tired of spending summers at their bleak old public pool. So they turned it into a colorful welcoming neighborhood hub

Citizens of the Week: Lauren Summers and Nicole Buchholz

The Grad Hospital residents were tired of spending summers at their bleak old public pool. So they turned it into a colorful welcoming neighborhood hub

The Marian Anderson Recreation Center (MARC) pool, at 17th and Catherine streets, was a pretty bleak environment, all concrete and scrubby grass. A metal gate at the entrance led to a fenced-off holding area, where swimmers were sprayed from an old water pipe to rinse off before jumping in the pool.

That bleakness had turned what should have been a neighborhood gem into an underutilized resource. Newer residents, accustomed to the aesthetics and conditions of private swim clubs, were disappointed by what they found at MARC. The underfunded rec center staff, longtime neighborhood residents who were also unhappy with the pool’s condition, lacked resources to make a change.

Summers and Buchholz set out to fill the gap between what their neighbors wanted and what the city could provide, using their connections and their skills to create a new neighborhood pool that is a resource for everyone.

As a Graduate Hospital resident off and on for 22 years, Summers straddles the fence between old and new. She first moved to the neighborhood as a college freshman, and moved back again several years ago. Since then, the neighborhood has significantly changed; according to census reports, Graduate Hospital saw a 61.4 percent decrease in African American residents between 2000 and 2015. Relations between the newcomers and neighborhood veterans have sometimes been tense, often because the more recent homeowners bring changes they want to see—but that don’t feel inclusive for everyone.

“It is so rare to be able to be part of something that has such a clear manifestation of change,” Buchholz says. “I love that my two-year old son’s shoes are covered with yellow paint from all the hours he spent cheering me on at the pool steps. As a parent, I believe it is critical to create spaces where children of all races and incomes grow up together.”

“We’re almost part of the problem,” says Summers, who works in Penn’s communications department and also runs Philly School News. “But we want to be part of the solution, and it’s hard to find the right balance.”

The pool—one of the densely populated neighborhood’s largest communal areas at 2.6 acres, and with the potential to act as an inclusive public space—was a place to start.

Summers partnered with Buchholz, a local resident involved with the South of South Neighborhood Association (SOSNA) who had worked on Philadelphia’s first pop-up pool project in Francisville in 2015. The Francisville project had used funding from the Knight Foundation to implement low-cost solutions and design to improve an underused public pool. Now Buchholz, an associate at real estate consultant firm U3 Advisors, wanted to do the same for her local pool, particularly for older neighborhood residents and children.

In late spring, Buchholz started designing aesthetic and experiential improvements to the pool, while Summers figured out the budget, as well as where the funding would come from. Ultimately, the two decided that a grassroots neighborhood fundraising campaign hosted on GoFundMe would be the most efficient way to fund and complete the project in time for the 2017 summer season.

But they never imagined how wildly successful the campaign would be—or how quickly they would reach their goal.

SOSNA provided $6,000 in seed money to begin the campaign, and 140 donors (123 of which are Graduate Hospital residents) contributed an additional $10,000. (Some $5,000 was donated within the first 24 hours alone.) Summers and Buchholz had originally hoped to raise $6,000 through the GoFundMe campaign, but when that goal was quickly reached, they increased the number to $10,000 to alleviate the staffing needs at MARC and fund an additional seasonal maintenance and lifeguard position.

With their budgetary needs met (and exceeded), Summers and Buchholz then led the volunteer efforts to transform the pool, mostly completed over a weekend in mid-June. The first thing Buchholz took on was the entrance. The requirement to rinse off before getting in the pool probably dates back to the earliest days, before pools were chlorinated and indoor plumbing was less common. Still, of the city’s roughly 70 public pools—comprising one of the country’s largest collection of free swimming pools—only three had outdated entry conditions similar to MARC. It had become a deterrent, preventing many residents from using the facility.

“I couldn’t believe the message that the city had given to the residents,” Buchholz says. “We don’t trust you, get in the cage, etc. Especially for the children, I wanted the pool to send them a message that they deserve joy and color, not cages.”

Volunteers painted the once bleak concrete bleachers just inside the gate bright blue and yellow, and hung colorful garlands on the exterior metal fencing. The pipe once used to spray visitors down has been replaced by a semi-private wooden shower stall built by OFC Philly, a local, family-owned woodworking shop. The pool interior has been repainted; a deck has been built; new lounge chairs, tables and umbrellas have been added; local artist Martha Rich painted a mural along one wall; and new plants green the space.

“This season has been particularly awesome,” says Jennifer Usas Peranteau, who has been a Graduate Hospital resident since 2010 and regularly used MARC pool since. “The entire energy of the space has such a positive and friendly feel. The improvements so many worked hard to complete make it such a welcoming spot for all who walk in.”

But the project that Summers and Buchholz began didn’t end when the last of the new plants was potted. “We didn’t open the pool and it was perfect, it’s not a band aid solution,” Summers explains. “As with anything, especially working with Philadelphia, it’s like an ongoing relationship in your community.”

Relations between newcomers and neighborhood veterans have sometimes been tense, often because the more recent homeowners bring changes they want to see—but that don’t feel inclusive for everyone. “We’re almost part of the problem,” Summers says. “But we want to be part of the solution, and it’s hard to find the right balance.”

The two have been working with the rec center staff to adapt to the influx of new users, in the hopes that MARC will receive additional funding next year after submitting statistics to the Parks and Recreation Department about the increased usage this summer. (The exact number of pool visitors is not yet known.) And though the Friends of MARC Facebook group has been sharing updates about the pool, Buchholz has been actively communicating in person with community members who don’t use that platform.

“It was a bit of a struggle to ensure that the message of the pool got out beyond Facebook,” Buchholz explains. She flyered around the neighborhood at churches, mosques, the Universal Charter school playground, YMCA, and a few businesses, and talked to as many neighbors as she could.

Summers and Buchholz remain committed to supporting the staff at MARC this year and for future pool seasons, and are now working with John Bromley, the recreation center director, to plan an end-of-season party for the neighborhood at the pool’s closing in late August. This, in and of itself, is a triumph: Last year, Bromley asked to be one of the city’s first pools to close; this year he has tried to keep it open as long as possible due to the community support (and to provide his staff with one extra paycheck).

“It is so rare to be able to be part of something that has such a clear manifestation of change,” Buchholz says. “I love that my two-year old son’s shoes are covered with yellow paint from all the hours he spent cheering me on at the pool steps. As a parent, I believe it is critical to create spaces where children of all races and incomes grow up together. It has been a joy to connect with parents through the common bond of our kids playing and laughing together.”