Home » Business » Too Big to Function?

Pay attention to development in Philly

Stay up to date on upcoming and proposed development across the city by attending a public Planning Commission meeting where commissioners review zoning bills, neighborhood and citywide plans, and large projects applying for zoning variances.

And if you’re looking for the bigger picture, check out the Philadelphia City Planning Commission’s “Philadelphia 2035: The Comprehensive Plan,” which outlines a vision for the next 15 years of community development and offers district-specific recommendations.

Welcome to the Age of Cities
The director of Drexel’s Metro Finance Lab on the ways that cities are doing the work to lift up communities and create opportunities for all
Ideas We Should Steal: Community-Centered Development
A Portland B Corp is pushing a more inclusive process for building up a neighborhood. Can Philly learn a lesson from the most gentrified city in America?
The Case For a Gentrification Dividend
Sending neighbors a check whenever a nearby building goes up would send the message that everyone should benefit from growth
The Citizen Recommends: Finding Tomorrow’s American Dream
East Mount Airy is on the verge of either falling into poverty or thriving. Next City is exploring why–and seeking solutions from residents. 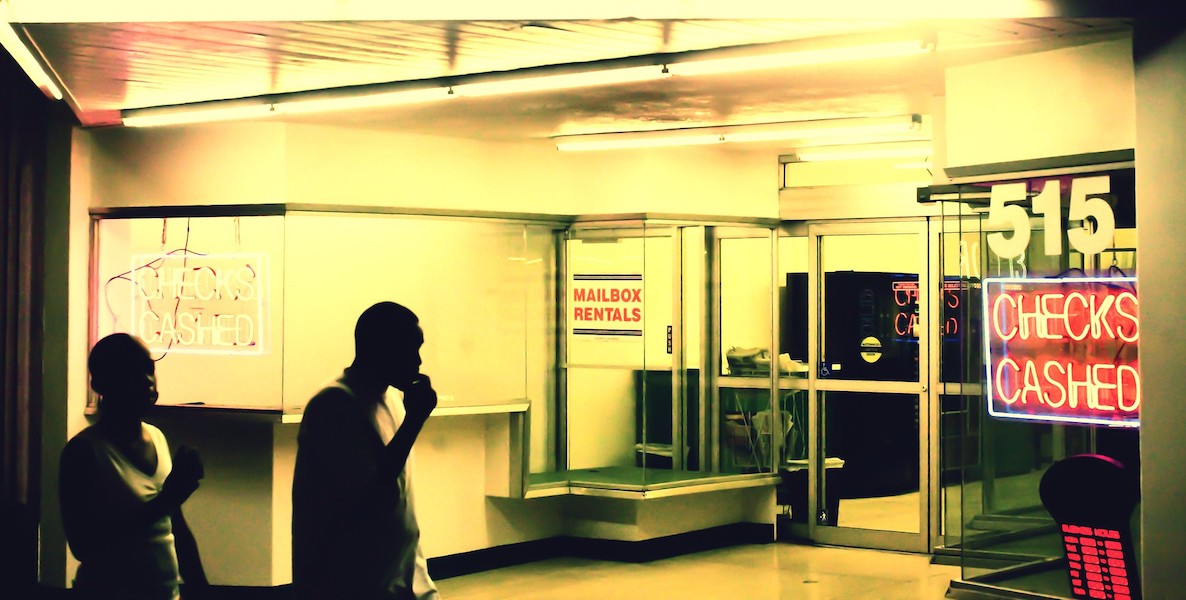 Too Big to Function?

Too Big to Function?

During the depths of the Great Recession, “Too Big to Fail” became commonplace jargon in the effort to restore order to a financial system run amok. The consolidation of financial power has multiple implications. During my exploration of Opportunity Zones, I have observed a fundamental disconnect between the compartmentalized lending and investment practices of large financial institutions (and silo-driven federal and state governments for that matter) and the small, integrated but still nascent regeneration efforts of innovative practitioners in urban communities. I call this disconnect “Too Big to Function.”

Let me set the scene. Many urban neighborhoods—particularly those that were targets of urban renewal in the 1950s or victims of highway expansion in subsequent decades (i.e., more appropriately labeled “urban devastation”)—bear a common spatial reality, irrespective of the city in which they are located. Once thriving commercial corners or corridors are now populated by abandoned buildings and vacant lots (often owned by various arms of the city government or local churches or absentee slumlords in various stages of tax delinquency). This is true even when nodes of economic strength (a university or hospital or publicly subsidized sports complex) are, incredibly, located only a few blocks away.

While the poorest 10 percent of American families have gone from having no wealth on average in 1963 to being $1,000 in debt in 2016, large companies omnipresent in poor neighborhoods (like Dollar Tree, which earned $22.8 billion in revenue in fiscal year 2018) have thrived.

These neighborhoods are past and present victims of institutional racism. They literally sit on the “wrong side of the color line;” access to quality capital and mentoring to help residents purchase homes and build businesses remains scarce while parasitic capital for dollar stores, payday lenders and check cashers is plentiful. The result: while the poorest 10 percent of American families have gone from having no wealth on average in 1963 to being $1,000 in debt in 2016, large companies omnipresent in poor neighborhoods (like Dollar Tree, which earned $22.8 billion in revenue in fiscal year 2018) have thrived.

zoning, which allowed big-box retail to enter communities in the first place and elevated lower prices and large footprints over small businesses and neighborhood fabric.

Across the country, an interesting set of investors and developers are focusing on restoring economic vitality to these neighborhood centers by pursuing interdisciplinary investments that put entrepreneurs, locally owned businesses and local-serving activities at the center of the conversation.

Ross Baird, for example, has worked with Access Ventures, a Louisville-based firm, to pioneer a “street corner” model that focuses on creating dense ecosystems of businesses, properties, and residences at strategic intersections or along strategic corridors of a community. Access Ventures invests in a whole neighborhood—one source of capital invests in housing, real estate, and growing businesses, with an eye towards a thriving, holistic economy.

These neighborhoods are past and present victims of institutional racism. They literally sit on the “wrong side of the color line.”

Brian Murray has used his firm, Shift Capital, to regenerate parts of North Kensington through the strategic purchase of former industrial buildings and the embrace of new urban manufacturing and maker spaces as a niche market. Shift has also forged a partnership with a respected Accelerator for minority owned real estate companies and is now working to apply a Neighborhood Trust concept to ensure that the local community ultimately captures the value created by its real estate activities.

Opportunity Zones are highlighting these innovative practitioners and intriguing models and bringing more players into the mix. Anthony Ackil, the founder of B.Good, a chain of healthy food restaurants, has started a new venture called Streetlight Ventures that combines extensive research and community engagement—as well as business support and mentoring—to develop and implement a vision for a mix of retail businesses that are responsive to the needs and desires of the neighborhood.

It should be apparent that these new (old) concepts of neighborhood centers and corridors represent a fundamental challenge to conventional bank lending and investment.

They are also highly passive, often waiting for deals and transactions to be offered, rather than working with trusted intermediaries to curate a pipeline of entrepreneurs and development schemes.

Finally, and most significantly, they are highly specialized and compartmentalized; investment and lending decisions are made via hierarchical silos that use disparate underwriting criteria and often require multiple authorizations. Single family housing operates by one logic; multifamily housing by another; commercial real estate by (still) another; small businesses by (still) another and so on.

The usual approach to fragmentation of this magnitude is to call for coordination and collaboration. But that approach often falls victim to entrenched fiefdoms, intra-firm rivalries and the federal government adage that “inter-agency collaboration is an unnatural act between non-consenting adults.” We need to go further.

Too Big to Function is an observation of how local markets operate today. It does not need to be a prediction of how neighborhood economies evolve tomorrow.

Investing in firms that take a “whole neighborhood” approach—like those firms identified above and many others—is one obvious path to success. Expand the reach of CRA by making non-housing investments in communities more the norm than the exception. This would also marry the capacity of bank CRA divisions to underwrite community (mostly housing) deals with the capacity of equity investors to invest in businesses.

The Urban Investment Group at Goldman Sachs is pursuing a “solutions-focused not product-focused approach,” exemplified by the mixed-use Teachers Village development in Newark. Readers of The New Localism will recall the case of Kings Cross in London, where one large investor (there an Australian pension fund) was able to stage and sequence the regeneration of a large publicly owned area strategically located near the confluence of several transit and rail lines.

The focus on integrated, multi-asset class investments, of course, doesn’t obviate the need to do the basics, including finding new and traditional ways to capitalize minority entrepreneurs and developers who, despite have proven

track records and authentic, market ideas, are seriously and indefensibly under-capitalized. There is a place here to expand existing—or create new—equity or debt products that enable minority entrepreneurs and developers to grow their capacity to meet market demand.

Too Big to Function is an observation of how local markets operate today. It does not need to be a prediction of how neighborhood economies evolve tomorrow.