Attend (virtually) the private screening of Beethoven in Beijing on December 16 at 7:30; get your FREE tickets here.

Bringing The Music Back
Temple Contemporary’s Symphony for a Broken Orchestra project repaired and returned 1,000-plus musical instruments to Philly students. Now it’s spreading its mission nationally
The Citizen Recommends: Marching Music
Commonwealth Youthchoirs—which wowed the Pope in 2015—presents “The Children’s March” to commemorate the children of the 1963 Birmingham protest and to inspire young people today
Meet the Disruptor: Jeri Lynne Johnson
The founder of Black Pearl Chamber Orchestra takes the elite out of symphonic music
Play On, Philly!
While schools gut arts and music funding, a Curtis Institute grad’s intensive program in two city schools is a testament to the “social mission of art.” Turns out, the academic benefits are pretty good, too 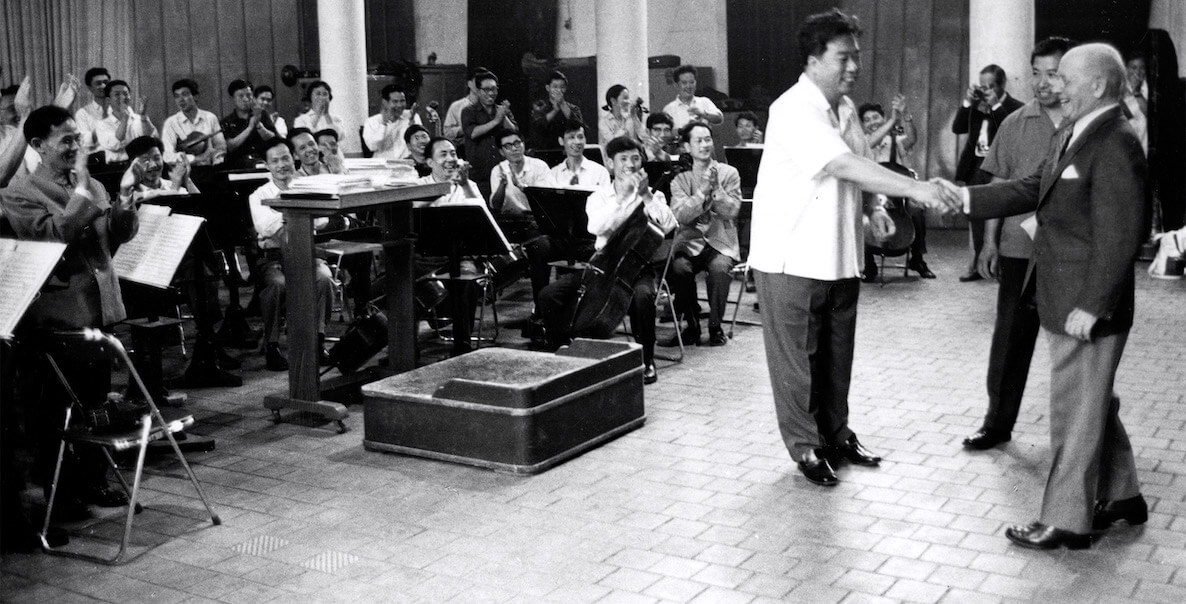 The Citizen Recommends: Beethoven in Beijing

A soaring new documentary from Sam Katz's History Making Productions explores the Philadelphia Orchestra’s role in the revival of classical music in China almost 50 years ago ... and the lasting global impact today

The Citizen Recommends: Beethoven in Beijing

A soaring new documentary from Sam Katz's History Making Productions explores the Philadelphia Orchestra’s role in the revival of classical music in China almost 50 years ago ... and the lasting global impact today

It’s strange to say that a movie about the revival of classical music in China is also, at its core, a Philadelphia story—but this is truly the case with Beethoven in Beijing, an award-winning new documentary from Sam Katz’s History Making Productions.

The Orchestra, under legendary music director Eugene Ormandy, was at the time the best in the country, and one of the best in the world. It was also the first American orchestra to play in the People’s Republic of China, which was no small feat: Not only had the relationship between China and America been hostile for roughly a quarter century by 1973, but China was eight years into Mao Zedong’s Cultural Revolution, the infamous, violent, 10-year period in which all things western—including music and instruments—were banned. Many musicians had been persecuted. Silenced.

“The Philadelphia Orchestra has a unique place in Chinese history,” Lin says. “And the Chinese public hasn’t forgotten that.”

But by the early 1970s, the history goes, President Nixon was eager to re-establish a friendlier relationship between the two countries. And so shortly after his own historic 1972 diplomatic trek, he asked Ormandy for his orchestra’s assistance in practicing a bit of musical diplomacy. (One of the great moments in the film, in fact, is the audio recording of the President’s phone call to Ormandy about the forthcoming invitation from China—a sliver of history preserved thanks only to Nixon’s predilection for recording everything.)

And this is where the film really kicks off, with the tour that signaled the beginning of the end of the Cultural Revolution, and the start of a transformative resurgence of classical music in China, with ripple effects we still feel today.

Co-directors Jennifer Lin (an author and former Inquirer reporter of 31 years) and Sharon Mullally (an Emmy award-winning filmmaker) have woven together several narrative threads and great characters to tell a beautifully layered story: There’s the exploration into the cultural and geopolitical effects of the Cultural Revolution and its end; there’s a pointed take on the value of musical education in a culture; there’s the revelation of the remarkable, lasting impact China has since had on the global classic music scene from the 1970s well into modern times.

It was important, Lin says, to take a wide lens with the movie, “to place this story in a geopolitical context of the two nations, and what I learned as we were building the story.” In fact, she spent years learning about this story, first as a reporter who lived and worked in China for four years as an Inky correspondent, later as the film’s writer, co-director and producer who spent weeks and weeks swimming in archival papers, recordings, video footage.

Related from The Philadelphia Citizen:
The Citizen Recommends: Sisters in Freedom
Sam Katz’s History Making Productions launches Womens History Month with a look at a little-known story about female abolitionists

In the beginning, before she knew much about the 1973 trip, she says she was struck by how many Chinese citizens not only knew, but loved, her hometown’s orchestra—not just the music, but the orchestra itself.

“The Philadelphia Orchestra has a unique place in Chinese history,” she says. “And the Chinese public hasn’t forgotten that.”

Once Lin returned home to Philly and started digging through archives and interviewing musicians who had been there, it became clear that this was, as she says, “a story that has to be seen and heard.” It was a realization that eventually led her to a partnership with executive producer (and longtime civic voice) Sam Katz.

“They said, ‘Do you want to hear some interesting music?’” recalls Tan Dun, the composer who won an Oscar for his Crouching Tiger, Hidden Dragon. “‘This is called symphony.’”

Katz, whose award-winning History Making Productions has generally focused on historic, Philly-centric stories, brought into the fold lauded longtime director Mullally. The final filmmaking team would be slightly bigger, growing to include a tiny handful of award-winning documentary pros, as well as Jindong Cai, a conductor, author and director of the U.S.-China Music Institute at the Bard College Conservatory of Music.

For his part, Katz was actually skeptical about the idea at the outset. The story, he says, was unclear to him, but the broad strokes Lin had laid out—”there was history, there was geopolitics, there was, of course, music”—was enough for him to decide to raise the money it would take to send cameras and the directors to China. They would see what came back.

What came back, he says, was truly “exciting” footage of the Philly Orchestra in China, performing in stunning concert halls, collaborating with their Chinese peers, leading classes. And so they pressed on, over five years, with four trips to China; fundraising, filming, interviews, research. Along the way, they got a Pennsylvania film tax credit, which is a big deal. They got a National Endowment for the Humanities, which is a very big deal. In more recent big-deal news: The finished product recently won Best Historical Documentary by the San Antonio Film Festival; it was also named a 2020 finalist in the prestigious Library of Congress Lavine/Ken Burns Prize for film.

And as the team pressed forward, the story—stories, really—became deeper and clearer and filled out with the sort of human moments that you remember, which was, says Katz, largely thanks to Lin’s reporting. “She’s a brilliant, experienced journalist who just knows how to find a story,” he says.

Related from The Philadelphia Citizen:
The Citizen Recommends: Philadelphia The Great Experiment
The latest from Sam Katz’s History Making Productions looks at the golden age of Wanamaker —when civic leaders didn’t wait for permission

In fact, while the overarching plot is a thoughtful historical narrative, it’s the series of stories within the story—the personal tales—that lend the movie its surprisingly emotional tenor. We hear a lot, for instance, from Philly musicians who were there in 1973; we also hear from musicians in the Chinese orchestras that grew after the Cultural Revolution.

We see the transcendent talent of Lang Lang, the Chinese wunderkind who famously studied at Philly’s Curtis Institute (which is also quite prominently featured); we watch the charismatic Philadelphia Orchestra conductor Yannick Nézet-Séguin on stage and off—a magnetic character and, as Lin puts it, “a city treasure.”

And we meet Tan Dun, the composer and Chinese cultural icon who won an Oscar for his Crouching Tiger, Hidden Dragon score. In one of the movie’s most memorable scenes, Dun describes hearing classical music—Beethoven’s Sixth—for the first time, as a middle schooler working in a rice paddy at a commune. The music played over a loudspeaker.

“Watching the concert scenes at a moment so many halls sit empty and so many performers are quiet only highlights the deep resonance of the film’s theme, which is really about the near-miraculous power of music to change and connect humanity.”

“They said, ‘Do you want to hear some interesting music?’” he recalls for the camera, raising his eyebrows. “‘This is called symphony.” He breaks into a wide smile. “‘The Philadelphia Orchestra … is in China.’”

Not surprisingly, the soundtrack—soaring, swelling music of, yes, Beethoven, but also Rachmaninoff, Chopin, Ponce and Dun—is like a character itself, and it’s powerfully moving, as are the many performance scenes. This is particularly true in Covid times, when a glimpse of the packed audience enjoying the live music hits especially hard.

Related from The Philadelphia Citizen:
Surviving the Quarantine: What Movies to Stream
Local film experts share streaming recommendations for viewers of all ages

In fact, if anything, watching the concert scenes at a moment when so many halls sit empty and so many performers are quiet only highlights the deep resonance of the film’s theme, which is really about the near-miraculous power of music to change and connect humanity. Or as Ormandy remarks in a moment captured in the film: “Through great music, many people became friends who were originally hating enemies.”

Want to see Beethoven in Beijing? The film will air this spring on PBS, as part of the Great Performances series. But you can also watch it this month at a free virtual screening: On Wednesday, December 16, at 7:30pm, History Making Productions is teaming up with The Philadelphia Citizen, the Philadelphia Orchestra, the Wharton School and the U.S.-China Music Institute to host #Ludwig250, a virtual 250th birthday celebration for Beethoven, which will include a showing of the full film, as well as a Q&A with Katz, Lin, and 6abc’s Nydia Han about the filmmaking process and the stories behind the story.