Documentary filmmaker and Sundance awardee Ben Kalina is making a documentary about HOME, but he needs funding to help finish the editing so that the film can air. Click here to donate!

Living Music
How music venue World Cafe Live is filling a gap for Philadelphia school students
The Citizen Updates: REC Philly
The music producers have launched a membership program to help Philly musicians thrive—and keep them in town
I Love Rock n Roll
Girls Rock Philly uses music, and being in a band, as a way to empower girls

Below is another cover by HOME, this one of CCR’s “Have You Ever Seen the Rain.” For even more, check out this Youtube page.

Support the band by making your event their next gig

HOME has played all sorts of gigs across the city, including at UPenn, with the Philly Pops, at the Constitution Center, and more.

Contact them using the info here to learn more! 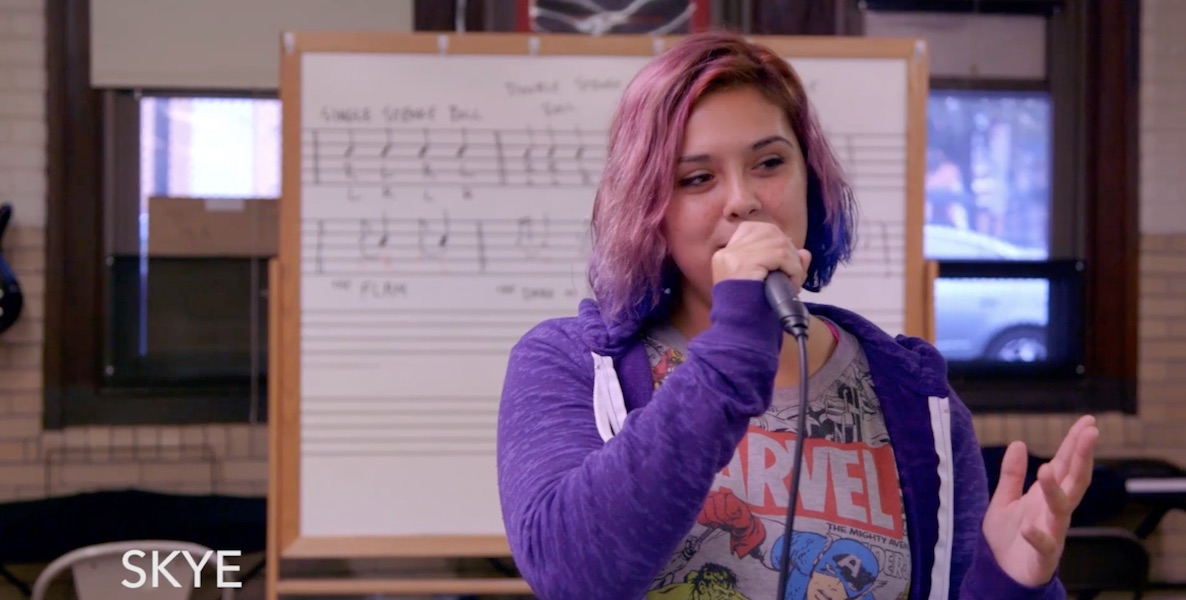 Local filmmaker Ben Kalina says that his favorite track by Andrew Jackson School’s rock band is “All I Want,” a cover of Kodaline’s 2012 incredibly dour single. It’s a painful and admissive song, the kind of thing that you’d hear over a bummer moment in an episode of Scrubs or in the background of a drippy indie movie—say, 2014’s The Fault In Our Stars. Kalina doesn’t love it because the band plays it with the most proficiency, or because it’s the most spot-on cover. He enjoys it because, for the band—called HOME—it’s the song that takes them home. They’ve often played it to close out practice sessions—a cooldown lap of sorts.

HOME has been kicking around since 2010, as the passion project of a teacher at Andrew Jackson named Chris Agerakis. Kalina says he first heard of the band through word of mouth; he and his family live in the neighborhood, and his first impression was that it was an ‘aw shucks’ kind of after school program—kind of like a closed circuit AV club for kids to mess around in for a few hours before heading home for the day. His first real taste for HOME was came when he was walking his dog by the school one day, and heard the shockingly well-arranged sounds of an actual rock group emanating from Andrew Jackson’s cellar.

“I really wondered what was going on,” says Kalina.

At first, Kalina’s interest was purely passing. But after digging in a bit, he took a serious interest. Here was a fully operational school of rock operating out of one of Philadelphia’s chronically underfunded public schools, one that gives several actual shows per year and gives kids a genuine early-life background in rock guitar, drums and keyboard.

To Kalina, the program itself wasn’t unbelievable—teachers in cash-strapped districts the nation over make special things happen for kids out of their own grit, gumption and pocket change. But the totality of it was downright impressive. Agerakis has taught nearly 100 of his students musical proficiency in his own free time, and never received an extra penny’s worth of stipend from the school district for doing it, all the while waiting on a new contract that hasn’t materialized since he was first hired.

It’s the Passion of the Music Teacher. It’s loud and silly and beautiful, kids of all races and backgrounds coming together to learn, en masse, The Beatles, Of Monsters and Men. It’s impossible to watch Agerakis leading his band—typically featuring multiple drumsets, guitars and keyboards—and not smile. There’s Agerakis, surveying his crew of middle school kids from behind an acoustic guitar—not his forte, he says, as he’s a “drummer first, a piano player second and a hackish guitar player in distant third”—as they hammer out tunes by artists ranging from The Ronettes to Queen. The kids look intensely focused on following the leader and hitting all the right notes. It’s less Steve Vai and more Guitar Hero. It’s as adorable as it is heartening. And it’s the kind of thing that Kalina just couldn’t help but make a movie about.

“The fact that the band is called HOME is not a coincidence. I think it’s a home for these kids,” says Kalina. “It’s a form of self-expression that they don’t have access to in other ways. It’s a way for them to excel, a way for them to have a little sense of pride. It’s a social group, a network that they carry with them all the time.”

Kalina is a Vermonter by birth, but spent about a decade in New York’s Hudson Valley before arriving in Philadelphia and enrolling in Temple’s film school. He now runs Philly’s Mangrove Media, a video production company focused on creating training films for companies and commercials. He’s also an award-winning documentarian, focusing primarily on climate change issues. His 2013 documentary Shored Up, about the effect of rising sea levels on coastal cities, won a Sundance Film Festival prize—and a sweet $25,000 grant.

If he hadn’t run into HOME, Kalina would probably be working on another environmental documentary. But he’s just that enamored with their story, and with what Agerakis has been able to do in spite of a funding shortfall. His movie about the Andrew Jackson School’s rock band is called, simply, Home.  It chronicles the successes, but also the struggles, of the band—in particular how and if it will continue when key students graduate, and Agerakis grows weary of the (uncompensated) pace. The movie will air on WHYY in spring or summer, depending on when Kalina can finish editing. He’s  launching an IndieGoGo campaign next week to raise the cash to hire an editor to help.

“It’s just so heartbreaking, living in a city and watching what’s happening in the school district,” says Kalina. “I’ve been wanting to do something for a while that in some small way helps to create some dialogue about what’s going on in the school system. After I started finding out more about the band and talking to Chris, I realized that it was a really great way of talking, cinematically, about the programs that can happen when you have an incredibly dedicated teacher involved.”

HOME practices two to three days a week after school, and Agerakis is particularly proud of the fact that his kids never miss practice; it’s one of the metrics that he uses to measure the success of his program. “I look over the attendance sheet occasionally, and I have kids with over 100 percent attendance—102 percent, sometimes—who are attending the optional extra practices,” Agerakis says. “It shows that it makes these kid want to come to school, and to stay there late.”

Agerakis says that a big part of keeping students interested in the band is electing to play songs that they find not only challenging, but different. He rankles against some other school rock ensembles that think kids’ attentions are better kept when they’re performing hip hop or, as he calls them, “sugar pop” songs. His method is to challenge them with music that they’re not familiar with, but that they stand a chance to fall in love with. “We’ve never done things that other ensembles do,” he says.

The devotion that some of the kids show to the group is astonishing. Agerakis says that an exceptionally talented fifth-grade keyboardist who plays in his junior band recently got into Masterman, the magnet school regularly listed among the best in Philadelphia. She elected to stay at Andrew Jackson so that she could remain with HOME. Agerakis says that it’s a validating statement about the effect that his work has on kids.

“It was extremely touching. But my first reaction was: we should have had that discussion before you declined,” he says with a laugh.

That passion, from students and teacher, was part of the attraction for Kalina. He has worked with students himelf; earlier in his career, he worked in a program that helped teach kids how to express themselves through video. But he says Agerakis’ work is different from anything he’s seen—that his drive is higher, and his program uncommonly effective.

“For a lot of kids, they don’t necessarily find a way to express themselves through other disciplines in school. It can be difficult for them to find themselves,” says Kalina. “Music, art—these things are irreplaceable. And you see that with HOME.”