Take action in your neighborhood

In 2017, the city launched its Zero Waste & Litter Action Plan, which aims to make Philly litter-free and zero-waste by 2035. The initiative emphasizes that individuals taking action in their own neighborhoods makes the biggest impact. Here are some of their recommendations for getting started:

Check out Greenworks’ “On the Ground” for other tips on how you can waste less as an individual and as a community.

Yes, it took 16 months, but Aminata Sandra Calhoun successfully got the city to clean up a vacant lot that had been accumulating trash for 44 years (!).

We’ve all seen these lots—in our neighborhoods and around the city.

Follow Calhoun’s lead and report the site; then put pressure on your Council person to ensure the cleanup actually happens. ✊???? 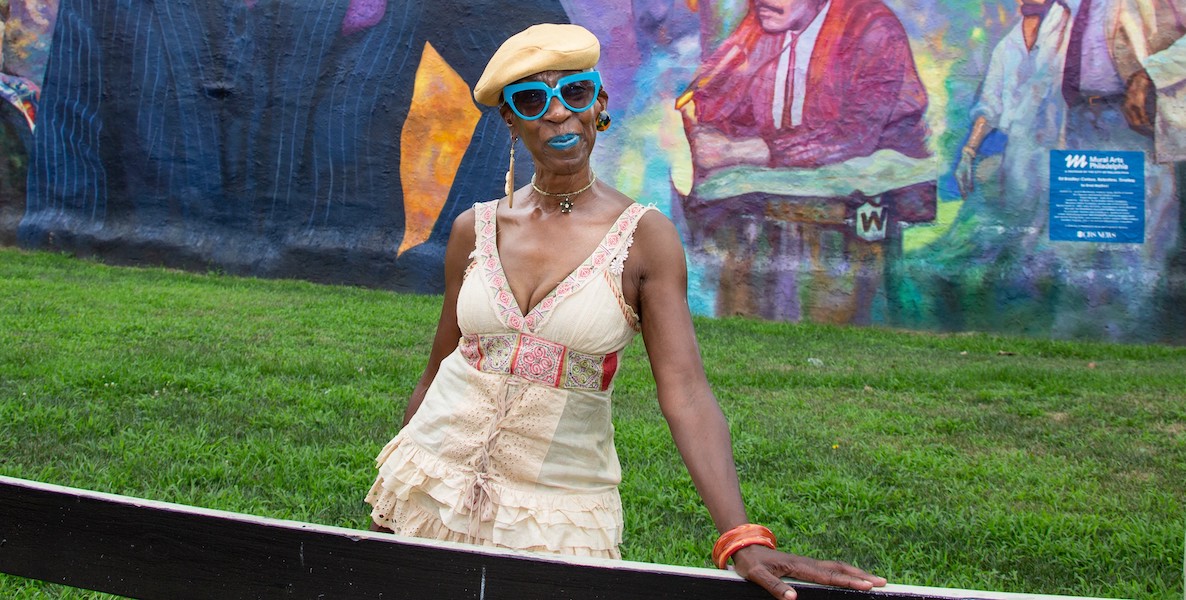 Soon after Aminata Sandra Calhoun moved back into her childhood home in West Philly, she stood on her porch, gazing down Belmont Avenue. The view filled her with an emptiness she couldn’t explain—until a realization hit her.

“My God,” Calhoun recalls thinking. “Where are all the trees?”.

When she was growing up, Calhoun says that old trees lined every block as far as the eye could see. But on that day in 2014, the 900 block was bare. When she asked a neighbor why, he told her that a few years before, people in trucks had come and removed the trees.

So Calhoun partnered with the Pennsylvania Horticultural Society (PHS) to plant three baby trees on the block. She plans to keep adding more, until all of them have been replaced.

Calhoun’s passion for beauty isn’t just clear by her actions—it’s clear as soon as you meet her. The 70-year-old retired social worker is often seen sporting bright blue lipstick, with perfectly mismatched earrings and bold glasses.

She’s earned a reputation as an effective community leader. But as a fierce critic of those who disrespect the neighborhood, she’s also attracted her fair share of resentment. Calhoun’s primary target? Litterers.

After years of living in other Philly neighborhoods, she returned to the Belmont community in 2014 to make sure that, after her parents passed away, their home didn’t fall into vacancy and disrepair. In the five years since, she has been slowly restoring the historic row house. According to Calhoun, it once served as the first fraternity house for the Philadelphia chapter of Kappa Alpha Psi, an African American Greek-letter society founded at Indiana University Bloomington in 1911. It was important to her parents that the house stay under Black ownership.

In between bathroom renovations and roof repairs, Calhoun has also dedicated herself to beautifying the neighborhood. She’s block captain, a role she has filled in every neighborhood she’s occupied. In order to take a more active role in shaping her community, she also completed the Citizens Planning Institute, a seven-week urban planning and development course run by the Mayor’s Fund for Philadelphia, in spring 2014.

Related from The Philadelphia Citizen:
Citizen Engagement 101
The Citizens Planning Institute has launched 500 community activists in neighborhoods around the city by arming them with the tools to make real change

As such, she’s earned a reputation as an effective community leader. But as a fierce critic of those who disrespect the neighborhood, she’s also attracted her fair share of resentment.

Calhoun’s primary target? Litterers. Trash is a persistent presence on the sidewalks, lots and alleyways near her home. She goes out nearly every day to clean up as much as she can. And in June, she organized her first successful community clean-up, an event she called a “Mindful Zero Waste Initiative.” The name touches on Calhoun’s belief that, to kick Philly’s trash problem, we need to address the wound, rather than keep slapping on bandaids. In other words: let’s discourage littering in the first place, so we don’t have to keep cleaning up the mess after the fact.

“I don’t want just a clean-up,” she says. “I’m trying to get into the minds, the thoughts of people. Let’s bring this to zero waste. Let’s let it be a thing of the past.”

Decades ago, Calhoun recalls, litter in Belmont was virtually nonexistent. Now, she often notices her neighbors throwing fast food wrappers out of car windows or tossing chip bags on the floor of the bus. To Calhoun, littering is a symptom of a larger problem among residents today.

“They do not have the mentality that I was accustomed to, that I grew up with,” she says. “They have no civic astuteness in how to live in the community.”

When Calhoun was younger, neighbors didn’t just refrain from littering—they went out of their way to support each other. After sweeping their front sidewalk, the Calhouns would sweep next door, as well. And when it snowed, Calhoun says neighborhood kids always shoveled their elderly neighbors’ driveways, without asking for payment. She also recalls the time when a single mother with 12 kids fell on hard times and couldn’t pay her water bill. Calhoun’s mother went door to door raising funds.

“They had self pride, community pride and home pride,” she says of residents in those days.

But according to Calhoun, that pride has faded with time. She sees it everyday, not only in the form of litter, but also dumping. Vacant lots in the neighborhood fill up with building materials, discarded furniture, old appliances, and more.

Calhoun says that one such lot, across the street from her home, had been accumulating junk for 44 years. The elderly woman living next door told Calhoun that she was afraid to go into her own kitchen at night because mice attracted to the property often find their way inside.

“Did Mayor Kenny, or any of the councilmen, come here to your door and dump this trash? It’s you, the people of the community doing this,” she says. “You can be low-income, but you do not have to be dirty. Your community does not have to be litter-filled.”

Determined to help, Calhoun made repeated requests to Licenses and Inspections, and sent letters to Councilwoman Jannie Blackwell. Sixteen months later, the city finally came to clear the debris, which took four days. Afterward, neighbors asked Calhoun what “connections” she had in city government. “‘I’m just a regular resident citizen like you that’s not going to tolerate this,’” she told them. “‘You didn’t do anything. You just lived with it.’”

When it comes to litter and dumping, discussion often turns to who bears the blame: the City or individual residents? After all, as reported by The Philadelphia Inquirer last year, the whiter and wealthier the community, the faster the City responds to 311 trash complaints. That means that Belmont, with a poverty rate of 36 percent and a majority of African-American residents, is often left waiting for action as trash piles up. But Calhoun isn’t pointing her finger at City Hall; nor does she accept her neighborhood’s socioeconomic status as an excuse.

“Did Mayor Kenny, or any of the councilmen, come here to your door and dump this trash? It’s you, the people of the community doing this,” she says. “I’m poor. I’m financially challenged. It does not make me want to just throw things out in the street. You can be low-income, but you do not have to be dirty. Your community does not have to be litter-filled.”

That attitude hasn’t made Calhoun the most popular person in the neighborhood. And the fact that she often confronts litterers doesn’t help matters, either. “They are not loving me in this community at all,” she laughs. “They feel I’m bougie.”

But even as her neighbors roll their eyes, Calhoun works tirelessly to improve their environment. She’s successfully advocated for Neighborhood Time Exchange, an artist residency program, to paint designs on the plywood nailed over doors and windows of vacant houses.

And in 2014, she repeatedly pressed the City to demolish a vacant building on Belmont Avenue, from which rocks and bricks fell onto the sidewalk. But even after L&I fulfilled her request, Calhoun didn’t stop there. She contacted Mural Arts to ask that someone paint a mural on the wall adjacent to the now-vacant lot. In 2018, the organization unveiled a mural of Ed Bradley, the Philly native and broadcast legend best known for his time as a correspondent on 60 Minutes. Calhoun was thrilled.

“Ed Bradley was a staple in my household,” she says. “[I remember] my dad sitting on the sofa, saying, ‘Ed Bradley, my man.’”

The mural, just around the corner from Calhoun’s house, is a daily reminder of her determination to both honor her parents and serve her community. And she isn’t slowing any time soon. Calhoun is currently enrolled in the Community College of Philadelphia, studying environmental design. With her degree, she hopes to start her own enterprise that combines her interest in art and design with her passion for eliminating waste and healing the environment.

“Art is life. Environment is the life that we live in,” Calhoun says. “For me, they go together like a hand in a glove.”

But until then, Calhoun continues to lead by example, hoping that every tree she plants and block she cleans will change her neighbors’ hearts and minds.

“This level of trash and litter is stifling to me mentally,” Calhoun says. “I’m still at the table within my head, saying ‘How can this be eliminated?’ But I do know this: it has to start with the person.”